Square Enix has just released new pre-rendered preview footage for their highly anticipated reboot of Thief, along with box art (currently only rendered for the next-gen builds), and it comes with some very tantalizing info; The game will be released as early as February of next year.

This places it in Square Enix’s current fiscal year of earnings, after the company originally just claimed the game would release sometime in 2014. A move like this likely indicates that development on the game is proceeding smoothly, and Square Enix believes in the project as a big early 2014 offering for their portfolio, particularly as their debut on the PlayStation 4 and Xbox One. This should be great news for fans, who have waited over a decade for an official new Thief game!

Square Enix appears to be trying to recover their recent financial losses by positioning themselves for a strong start in 2014, so they can at least close out their fiscal year in the black. February will also see them releasing hotly anticipated RPG conclusion, Lightning Returns: Final Fantasy XIII, which will arrive exclusively on current-gen consoles, after being delayed out of this year. 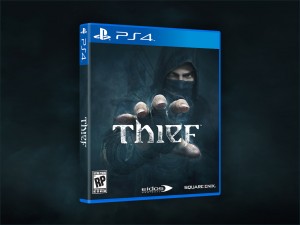 After being among the many publishers that failed to turn a profit throughout most of 2013, despite high sales and acclaim of this March’s Tomb Raider reboot, Square Enix is also bolstering their year-end calendar with several re-releases in established properties, which are guaranteed to sell well amongst their nostalgic fanbases. These include Kingdom Hearts 1.5 HD Remix, and Final Fantasy X/X-2 HD Remaster. The company also plans to imminently re-launch their ill-fated MMORPG, Final Fantasy XIV Online, which has recently held several closed beta tests, receiving much better feedback this time.

Thief is one of many acquisitions that came to Square Enix through their absorption of Eidos, along with Tomb Raider, Hitman, Just Cause and Deus Ex. With the original Thief games considered the benchmark for three-dimensional stealth, even moreso than the combined likes of popular brands like Metal Gear Solid and Splinter Cell, demand for a new Thief game has skyrocketed after so many years! Given that stealth-driven games have seen a comeback in recent months, considering the immense acclaim and sales of games like Dishonored, Far Cry 3, The Last of Us and Square Enix’s own Hitman: Absolution, the financial gamble of reviving Thief seems poised to pay dividends, as the timing couldn’t possibly be better!

Thief arrives on February 25th in North America, and will come to Europe three days later, on February 28th. It will release on PC, Xbox 360, PlayStation 3, PlayStation 4 and Xbox One. Eggplante will continue to deliver you all of your Thief news, as it stalks us.