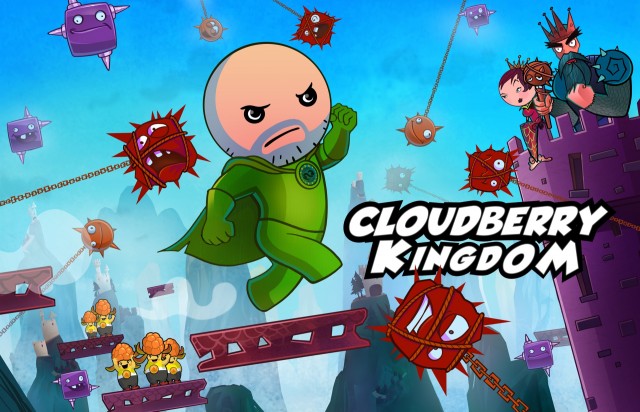 Cloudberry Kingdom laughs at your misery. It revels in your pain. It cackles at your failure. Even then however, serious platformer enthusiasts probably won’t be able to put it down!

For those unfamiliar, Cloudberry Kingdom is an indie platformer, and the debut effort of one loveably eccentric Pwnee Studios. The project was funded via Kickstarter, and thanks to its runaway success in the crowd funding circuit, it ended up releasing on just about every modern digital game channel, starting with Steam, Xbox Live Arcade, the PS3’s PlayStation Store, and the Wii U eShop. The game is also slated to arrive on Mac, Linux and the Vita’s PlayStation Store later in the year.

While Cloudberry Kingdom is proudly multiplatform, it’s spotlighted on PS3, due to being the second offering of the PLAY 2013 promotion. It was initially reported that the game was to be cross-buy with its Vita counterpart, but with the Vita version’s delay, it’s unclear if that will still be the case later on.

Regardless however, from a programming standpoint, Cloudberry Kingdom is very remarkable. The game plays like a two-dimensional, old-school-style side-scroller, consisting of many billions of potential levels, as dictated by a highly detailed design algorithm. 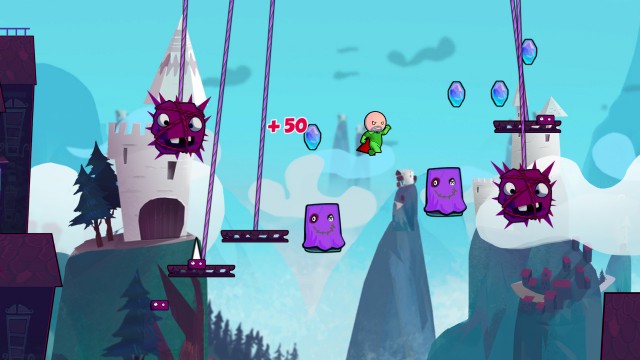 In layman’s terms, what this means is, the game could throw any number of unpredictable terrain and obstacles at you in any given level. You’ll never see the same levels twice, especially since the game dynamically alters the stage design depending on player skill level, to a degree. Of course, even then, Cloudberry Kingdom prides itself on its absurdly high difficulty level. It may actually be even more difficult than the already ruthlessly punishing Stealth Inc.: A Clone in the Dark!

The gameplay itself however is quite simple. You take control of a washed-up platforming hero named Bob (voiced by Kevin Sorbo of Hercules: The Legendary Journeys fame), an obvious spoof of Mario. Your job is to rescue a snooty princess, no doubt a parody of Princess Peach, from the irrationally villainous King Kobbler, appropriately a mockery of Bowser.

You see, Kobbler has gotten his hands on a magical orb that can generate infinite kingdoms for him to simultaneously rule, hence Cloudberry Kingdom’s limitless potential levels. He’s kidnapped the princess because, why not? That seems to be Bowser’s best excuse, after all.

Cloudberry Kingdom’s levels are short, feasibly able to be completed in around seven to ten seconds, if you can successfully circumvent them. It’s circumventing them that’s the catch though! After all, they’re almost always riddled with absurd degrees of swinging spiked balls, bottomless pits, flying fireballs, Super Mario Bros.-style rotating flame sticks, retractable spikes, leaping dragons, dropping lava, disappearing platforms, bouncy platforms, falling heavy orbs, bumbling insects, and any conceivable degree of other nasty things that will kill Bob in a single touch!

Even the most ruthlessly skilled of platforming gamers will die, and die constantly in Cloudberry Kingdom! Despite the stage design being randomized and entirely dictated by an automated algorithm, the levels feel legitimately programmed. None of them are impossible, and you can prove this by spending some of your collectible Gems to watch the CPU beat the stage, showing you how, but never doing it for you. Even on the most masochistically inconceivable setting, navigating the proper path with exact timing and pixel-perfect precision will get Bob through each ingenious gauntlet unscathed, even if it does take tons of practice in some cases!

The game’s main Story Mode is divided into a staggering 240 potential levels, 40 for each of the story’s six Chapters, and yes, they’re all randomly designed in each playthrough! There’s a bonus seventh chapter that cranks the difficulty even higher, but only serious masochists will want to attempt it! Thankfully, you are at least given infinite lives in Story Mode, and respawns are always quick, almost instantly putting you back in the action whenever you mess up.

Throughout the Story Mode, you’ll not only play as Classic Bob, who uses traditional running and jumping, but also variants that will mix up the gameplay and keep it interesting. Bob occasionally gains the ability to double jump, or even use a jetpack across various stretches of levels, for example.

In other levels, Bob is shrunken or oversized, or perhaps even grows and shrinks continually, altering the physics of your movement and jumping. Yet more levels will force Bob to be constantly moving in a rocket car, regulate his momentum by being stuck to a giant wheel, or be stuck in a box that only allows him to move by jumping as well. There’s even a variant that puts Bob in a spaceship and forces him to navigate around obstacles in the air!

Not only do these custom variants keep the level design interesting, but they also allow players to push their platforming skills to the limit in a variety of clever ways. The level design algorithm even effectively adapts to whichever Bob variant the player is currently using, and it finds horrendously tough, yet ultimately fair ways to test all of them in many sorts of cruel and unusual fashions.

Some variants are even exclusive to playing co-operatively as well! Cloudberry Kingdom supports four-player co-op, albeit only locally, allowing players to control four different Bob designs, and try to play levels together. You can even tether all four players so that they’re forced to stick close together, which is a bizarre sort of challenge that other co-op platformers haven’t attempted before!

The platforming gameplay is very basic, and it’s limited to only the most patient and masochistic of players, but there’s something oddly addictive about Cloudberry Kingdom. Even as you die upwards of fifty times in an especially troublesome stage, it’s a game that pushes your skills and doesn’t hold your hand. The fact that you know a solution exists, and that you can see it if you so choose, and get it with enough practice, is enough to keep worthy players pressing on for hours at a time, until they claim victory!

The addiction only worsens when you chase high scores in Arcade Mode. In Arcade Mode, you can play variants that gradually ramp up the difficulty, give you a time limit that you have to extend by collecting Gems, continually change the Bob variant you use between levels, and even blend more than one Bob variant together, which is truly a test of skill!

Unlike Story Mode, Arcade Mode now gives you limited lives, and when those lives are spent, you’re done, even if you can get 1-Ups from collecting enough Gems throughout the levels you play. Of course, the randomized level design and continued desire to chase a placement on the online leaderboards will keep players coming back again and again, trying to outdo their most ludicrously strained gaming ability with Cloudberry Kingdom’s hysterical regime of platforming punishment!

The gameplay is sound, even if this seems to be the kind of game that’s designed explicitly for platforming masochists who want to push their skills like never before! As a programming achievement, Cloudberry Kingdom is indeed incredible! It feels like one of those ludicrously hard mod games you may play on a Flash-enabled web browser, and get surprisingly hooked on, despite how aggressively it renders your playing skills impotent time and again!

In fact, speaking of feeling like a mod game, that’s the only serious drawback to Cloudberry Kingdom; It looks and sounds kind of ugly. In fact, it looks downright amateurish in design, even if it is surprisingly well-programmed. Perhaps that’s the point, but the graphics are often garish, and can cause considerable eyestrain during extended play in the more masochistic stages, due to all of the chaos that your eyes have to try and keep track of.

The odd mix of boppy and hard rock tunes also feels misplaced. There’s nothing theoretically work with the soundtrack, but it can’t seem to commit to a single atmosphere. It’s like the developers just got a handful of independent music samples and threw them into the game with no rhyme or reason. It’s another sloppy element that makes Cloudberry Kingdom feel like it was slapped together by some bored college students from a technical standpoint, even if it’s an official, publisher-endorsed game release, backed and brought to you by mega-publisher, Ubisoft no less!

Still, there’s no denying that Cloudberry Kingdom is the right kind of frustrating. It offers ridiculous, but still legitimate levels of challenge. Conquering the sadistic obstacle courses that its randomized programming throws at you comes with an incredible sense of accomplishment, even at their most seemingly unfair. The game is hilarious to watch, addictive to play, and a very cool masochists’ game that is more appealing and replayable than it has any right to be!

As far as platform differences go, there aren’t too many to speak of, given Cloudberry Kingdom’s simplistic presentation. The PC version isn’t quite as recommendable to us however, since it’s less co-op-friendly and doesn’t come with any real perks. It also pretty much demands a Gamepad, lest you permanently damage your wrists with its insane gameplay! We can’t say we hold out much hope for the Mac and Linux versions of the game for these reasons. Still, if you prefer gaming on Steam, Cloudberry Kingdom is still quite playable on PC, just with less advantages.

As for the console builds that Cloudberry Kingdom definitely seems to have in mind, the Xbox 360 and PS3 versions are pretty play-friendly, especially in co-op. Both seem to run and play just fine, with no visible differences.

The PS3 version is slightly more recommended however, since the more precise and comfortable Directional Buttons on the PS3 controller are much better suited to this game than the squishy, unreliable D-Pad on the Xbox 360 controller, which can also cause wrist strain during extended play. It’s also possible that PS3 players can still enjoy a cross-buy incentive when the Vita version arrives, even if it’s only possible at this point.

The Wii U version supports off-TV play on the Wii U Gamepad, a big plus, but it also launched without online leaderboards, hurting its replayability on top of the expected lack of Achievements/Trophies. With that said, the game plays great on the Gamepad, as well as with a Wii Remote or Wii U Pro Controller, which are necessary for co-op sessions.

The Wii U build doesn’t quite measure up to the PS3 build we’ll admit, but it’s much more comfortable than trying to play on Xbox 360 or PC. Nintendo gamers should be quite pleased with the Wii U version of Cloudberry Kingdom, which is second only to Sony’s version. Cloudberry Kingdom seems to offer the best mix between comfortable, fun, accessible and replayable on PS3, and that’s made all the better by the potential PLAY 2013 incentive.

Regardless of your platform of choice however, if you enjoy old-school platformers, and you love a good, memorable challenge, then definitely seek out Cloudberry Kingdom! It’s the best possible way for you to enjoy punishing yourself!