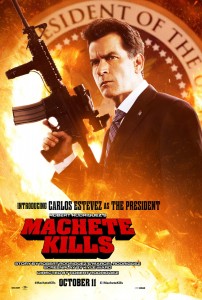 Rarely has a movie title gotten to the point of its appeal as deftly as Machete Kills.

A sequel to the 2010 cult hit, Machete, a movie expanded from a fake trailer designed simply for kicks in 2007 double feature, Grindhouse, Machete Kills brings back the titular unstoppable badass so enjoyably portrayed by Danny Trejo, one of writer-director, Robert Rodriguez’s favourite collaborators. He’s once again kicking ass and taking names for America. Or is that Mexico? Whatever. He’s kicking ass.

This time, Machete has been recruited by President Rathcock (yes, that is his real name), played by, “Newcomer”, Carlos Estevez (read: Charlie Sheen, billed by his birth name for the first time), to stop an arms dealer from launching a weapon into space. Along the way, he’ll encounter schizophrenic crime lords, cloned super soldiers, hanging-happy sheriffs, and of course, plenty of foxy ladies. Like the first movie, it gets kind of ridiculous, but I wouldn’t have it any other way, because it’s all just so much fun!

If you are in fact coming for the women, Jessica Alba and Michelle Rodriguez return to their respective roles from the first movie, but they’re joined by a ton of new female faces that help to make the sequel feel like much less of a boys’ club this time.

This is mainly thanks to the introduction of a gun-crazy bordello led by a stunning-as-usual Sofia Vergara, portraying self-professed “man-eater”, Madame Desdemona. How do they get mixed up in things? It’s stupid, and contrived, and that’s the point, so who cares? Besides, Desdemona has a machine gun bra that looks like it was ripped right out of Austin Powers. Does one need to read into that?

The ranks of Desdemona’s trigger-happy working girls even include a now-stupendously sexy Alexa Vega, best known for her previous collaboration with Robert Rodriguez as Carmen in the Spy Kids movies, niece to Danny Trejo’s character in that series, also named Machete. Yes, seriously. Now however, she’s KillJoy, Desdemona’s number-two who seems to be pioneering a new standard of cowgirl garb/lingerie cross-stitching. Needless to say, Ms. Vega has grown up quite a bit since Spy Kids, if this movie is any indication, and it’s great to see her, um, fill out the role of an action girl very nicely!

Beyond the pursuit of Desdemona, Amber Heard also joins the cast as Machete’s new mission contact, Miss San Antonio, who is… Miss San Antonio, outside of her spy career. Go figure. It’s strange that the movie barely features her in the first half, beyond scenes already given away in the trailers (and a humourous surprise that will delight older adults who used to see grindhouse movies in the 70’s), and the same is somewhat true of Lady Gaga, making her film debut as master-of-disguise bounty huntress, La Chameleon.

If I’m being honest, Lady Gaga’s role seems almost entirely played for laughs as well. I guess Rodriguez thought that his exploitation spoof wasn’t funny enough with just a machine gun bra and the audience brain-melt of watching a Spy Kids actress portray a hooker in what may be the same continuity for all we know.

Oh, and before you fellow young males get too excited, I may have some bad news; Alexa Vega’s bare bottom is about the closest that Machete Kills gets to actual nudity. This stands in stark contrast to the first movie, which had gratuitous nudity all over the place. I suppose somebody took issue with it, because much more effort has been put into giving a slight aftertaste of girl power in this sequel. It’s still Danny Trejo’s show, through and through, but the female actors are given lots more to do, and are definitely given more direct opportunities to participate in the action scenes compared to the first movie. This should make Machete Kills significantly more approachable for female viewers compared to its predecessor.

Fortunately, even though the nudity has been cut out, the violence is not only preserved, but potentially increased compared to the previous movie! Machete dispatches his foes in the same bloody, over-the-top ways, even more ridiculously here than before! The movie even drops all pretense and openly lampoons how difficult the character is to kill, right from the opening moments. As with the first movie, Machete Kills keeps its tongue planted firmly in its cheek with its violence, and it’s all the better for it.

Machete Kills even begins with a fake trailer showcasing its sequel, Machete Kills Again… In Space!, which Robert Rodriguez already plans to actually make in order to cap off the trilogy. The disadvantage to this otherwise hysterical gag is that it immediately reveals most of who lives and who dies in Machete Kills proper, but beyond that, it will greatly amuse those who already enjoyed the first movie especially.

The intentionally non-sensical story of Machete Kills even starts sequel-baiting like mad for Machete Kills Again… In Space!, something I found surprising, but something that was no doubt another winking joke by the filmmakers, in reference to grindhouse filmmaking. It goes without saying, but you don’t watch Machete Kills for the plot anyway. You watch it for Danny Trejo’s three B’s that (apparently) make a perfect film; Blood, blades and babes. Well, sometimes he substitutes, “Blades” for, “Bullets”, but hey, Machete Kills has bullets too.

But is Machete Kills a perfect film? Obviously not, even if a big part of the joke is embracing supposed ‘bad’ filmmaking. It looks more airbrushed and polished compared to its predecessor, but that does sort of take away from the unique grindhouse flavouring. This makes Machete Kills feel less, if you will, “raw” than Machete, as if it’s trying to be more studio-friendly for some strange reason.

How Machete Kills stacks up to Machete in terms of quality will also be a matter of debate. My company and I mostly agreed that the second movie was superior to the first, but that’s because we were going for the action-packed craziness. That, along with the female presence in the sequel, is undeniably improved compared to the first movie.

On the other hand however, the added gloss and obvious attempt to respond to mainstream feedback from DVD rentals might make Machete Kills feel a bit too clean compared to the grungier and more hard-hitting first movie. If you liked the raw, testosterone-packed grit best in Machete, you’ll likely feel that the first movie is the superior of the two.

Still, even if it is mainly designed for people who are already fans of the first movie (and Grindhouse), and even if it’s a blatant celebration of irresponsible filmmaking, which may bother some (not me, but some), Machete Kills is just a huge amount of fun for people who enjoy cult-flavoured movies. It’s truly inspired in its brilliantly-calculated stupidity, and if you don’t mind the frequent bloody violence and sex jokes, you’ll likely find yourself enjoying it in all of its delightfully bad taste.