Nintendo isn’t shy when it comes to custom 3DS and 3DS XL hardware. They’ve already made variants for Zelda, Animal Crossing, Pokémon (three times over), as well as Fire Emblem and Kingdom Hearts. 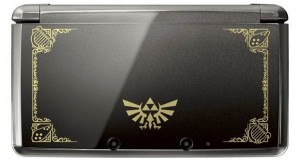 When The Legend of Zelda: Ocarina of Time 3D was released, Nintendo released the custom console pictured at right to go along with it. It’s easily our favourite custom console to date.

More recently, Nintendo kitted out the Wii U with a custom Zelda-inspired GamePad design (which we unboxed right here, by the way), to celebrate the release of The Wind Waker HD (read The Eggplante Review here).

With the upcoming release of The Legend of Zelda: A Link Between Worlds, Nintendo is at it again, this time with a custom 3DS XL console featuring the gold and black triforces from the box art of the new game.

We love the way Nintendo has used its two-tone design to mirror the two worlds of A Link Between Worlds, and it makes for a subtle yet beautiful console. Take a look below and let us know what you think.

Officially, this console hasn’t even been announced by Nintendo, but the scoop has been revealed via a (supposedly leaked) Black Friday ad for GameStop, which you can see below. For a penny under $220, you’ll be getting the console, as well as an eShop download of the full game, so if you don’t have a 3DS yet, this is your chance to get an awesome collectible and what could turn out to be the best game on the console this holiday season!

The Legend of Zelda: A Link Between Worlds launches November 22nd in North America and Europe.