Tactical RPGs have always been near and dear to me.  The experiences they have offered me have been nothing short of amazing, while also providing complex battle systems that are easy to learn but tough to master. Yet no matter how many times I play favourites like Final Fantasy Tactics, Valkyria Chronicles, Jean D’Arc or the Fire Emblem series, there’s something about the Disgaea series that’s always resonated with me most.

So what is it about Disgaea that makes it such a loved series? Above all, its self-realized, non-sensical fun.  Most tactical RPGs tend to be really serious, lacking that refreshing sense of humour we don’t see nearly enough of in games.  Disgaea is one of the few that playfully pokes fun at its own stereotypes, yet still touches hearts with a few deeper moments.  Love it or hate it, the series is one of the best examples of hardcore tactical RPGs out there.

Now 10 years since the first game in the series, Disgaea: Hour of Darkness, there are a lot of other games that have tried to replicate it.  Some have been more successful than others, but none have pinpointed the same charm that made Disgaea so popular.  Nippon Ichi, the team behind the series, have gone back to the series’ origins, celebrating everything that made it so unforgettable, with their latest game, Disgaea D2: A Brighter Darkness.

In terms of gameplay, D2 takes place on a grid-like board in turn-based combat much like any other in the genre, but the series sets itself apart by having you take turns as a team instead of individually. By doing so, you could potentially combine for a team attack or put yourself in danger in a matter of seconds.  The key to mastering this unique and complex system is to plan every individual move you make and the potential outcomes that could arise by doing so.  Luckily D2 features a comprehensive tutorial right from the get-go so you can get right into the action. 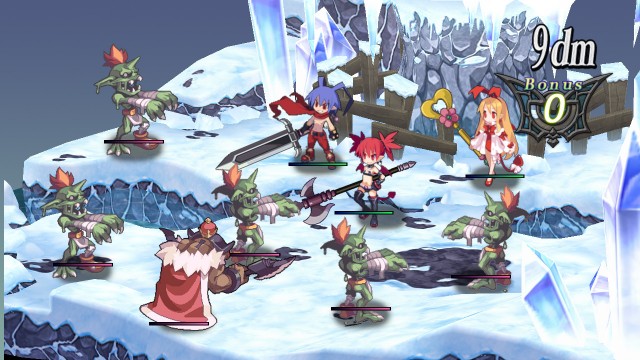 Customization is another big part of the series and makes its return in D2.  By using a tool called the Dark Assembly, you can create your own custom party right after the tutorial. Have a party idea in mind? Want to pull off the perfect combo? Go for it.  It doesn’t end there. Thanks to a new mechanic called the “Cheat Shop”, you can take customization to a whole new level and change the world around you such as modify EXP gain, Weapon and Skill EXP gain or enemy levels.  Anything you can imagine in the genre is practically at your disposal.

Does this make the experience easier than past instalments in the series? Yes, but that doesn’t mean it takes away from the overall game.  D2 offers a dense world full of party customization, hilarious skits, Geo Panels, item worlds, ludicrously high levels (Lv 9999, anyone?) and several other features that made the original shine.  If one feature falters, there are tons more the game excels at.

While D2 does a truly wicked job of harkening back to Hour of Darkness, full of the series’ trademark humor, anime interludes and other debauchery, gone are all of the more sentimental moments that helped balance the experience.  It’s not a huge loss, seeing as there are plenty of other game’s in the genre that offer nothing but drama, and stays true to the spirit of the franchise in every other way.

As a fan of the series, it’s difficult not to have a bias towards D2, but one of the biggest drawbacks to this game is its inability to introduce newcomers to the franchise.  By no means is it necessary for you to be a longtime fan, but there are several references made specifically to fans of Hour of Darkness.  If you want to get a good feel for each of the characters D2 has to offer do some research beforehand, it’ll make a big difference.

Disgaea D2: A Brighter Darkness may not be the most accessible game for some, but it offers a hell of an experience if you’re looking for something outright silly in tactical RPGs.  While it does sacrifice some of its more heart-felt moments in the process, it still manages to be itself and rekindles everything you loved about the original.  It doesn’t happen often enough.