In recent years, Hollywood blockbusters have become increasingly more bombastic and over-produced. That’s not to say that all Hollywood blockbusters are bad, but in the supposed desire for “innovation” in realizing stories on the big screen, it’s true that the flash does tend to override the substance more often than not these days. Thankfully, Ender’s Game is a blockbuster to not only buck this trend, but remind us of what’s at stake when we so capriciously detach ourselves from the world around us.

Long in development for a film adaptation, Ender’s Game debuted as an acclaimed sci-fi novel published in 1985, in turn an expansion of a short story published by the same author, Orson Scott Card, in 1977. Card originally declared Ender’s Game to be “unfilmable”, a notion that was only strengthened when the movie spent so long in development hell. Of course, the exact same declaration was said about award-winning graphic novel epic, Watchmen for decades, and that movie was eventually realized in 2009, even if it was a bit of a rigid adaptation by modern standards. Thus, it was only a matter of time before someone managed to translate Ender’s Game to film with today’s staggering modern filmmaking resources, warts and all.

Predictably however, Ender’s Game shares the same key weakness of Watchmen as a movie unfortunately. It’s still smarter and more provocative than most other large-scale Hollywood movies, which is appropriate, considering its rather dark underlying themes, but the story also doesn’t feel like it has any room to really breathe. So much care has gone into not betraying the core story and its message, that it’s left Ender’s Game feeling a bit cold and heartless, difficult for many audiences to properly invest in in the long-term, which will no doubt hurt its chances of becoming a franchise.

If you’re unfamiliar with the novel, Ender’s Game revolves around its titular protagonist, Ender Wiggin. A gifted child military prodigy, Ender is recruited into a specialized ‘Battle School’ to train with other children for an imminent alien invasion, by insectoid creatures that almost wiped out humanity many years ago, known as the formics. Bullied and isolated, Ender’s genius comes out by the machinations of the ruthless Colonel Graff, but this also raises the question of whether there is more to Ender’s training than what’s apparent.

The movie is inevitably forced to hack out entire story arcs from the rather busy novel, most notably shrinking the role of Ender’s siblings to a near-microscopic level. Hell, Ender’s sociopathic brother, Peter, a pivotal personality in the book, only appears in one scene and is never seen again! Still, Ender’s Game remains reasonably faithful to the major events of the novel, also not watering down what it did maintain for the movie, something that fans of the book will hopefully appreciate, regardless of other omissions from the source plot.

Asa Butterfield is the personality that really sells the movie however, perfectly capturing the title personality of Ender. Ender is ruthless and brilliant, but Butterfield tries his best to nonetheless stay in touch with the character’s suppressed humanity. Of course, the fact that characters meant to explore this element of Ender are pushed into the background only makes his efforts worth so much, but at the very least, he makes for a compelling lead personality to push the movie forward.

Harrison Ford and Ben Kingsley are equally impressive in supporting roles, even if it’s difficult to elaborate without some crucial spoilers, at least for those who haven’t read the book. Viola Davis feels underused as Major Anderson, another character that, like Ender’s sister, Valentine (also a bit of a waste of the talents of Abigail Breslin), is supposed to get away from the character’s cold, violent side. As strong as the performances are, it’s difficult to shake the feeling that the movie is slanted in favour of only one side of Ender’s personal struggle. 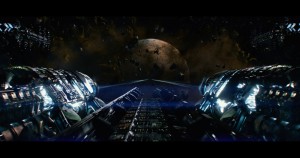 Thankfully, Ender’s Game also has plenty of very strong effects work and set pieces to back it up as well. The novel is extraordinarily well-realized on the big screen, particularly the famous ‘Battle Room’ sequences from the book, even though the action sometimes feels a bit stiff, much like the storytelling. As great as the Battle Room looks, the zero-g skirmishes in Battle School suffer from feeling, well, weightless and floaty, which may not be surprising. This was bound to happen, but that doesn’t excuse the fact that Ender’s Game could have been a bit more exciting when it actually does come to an action scene.

Most frustrating here however is that the movie ends on something of a non-climax, and then just shamelessly sequel-baits, creating a very poor sense of resolution when the credits roll. Yes, the book was ultimately wrapped up in a similar fashion, and the heart-wrenching twist turnout from the book is left intact in the movie, without spoilers from me of course. Still, with an entire chunk of the book’s denouement completely removed from the movie (as Ender’s siblings no longer matter), you just get the sense that Ender’s Game ultimately didn’t have much of an exit strategy, not without butchering the source material anyway.

The surprising lack of real thrilling action in Ender’s Game, contrary to what the marketing would have you believe, hurts the appeal of going to see the movie in IMAX quite a bit too. I did see Ender’s Game in IMAX, and thankfully, I got my ticket for free, but I have to say that the movie is extremely uneven as an IMAX presentation. If I’d paid the full price, I would have felt ripped off.

The IMAX elements enhance some of the space sequences, and of course the sprawling zero-g Battle Room quite nicely, but they do absolutely nothing for the majority of the movie, which just seems to be checking off boxes in terms of following the events of the book as best it can. In my opinion, paying the hefty price of an IMAX ticket for Ender’s Game just isn’t worth it in the end. You’ll get virtually the exact same experience by just watching a standard digital cut of the movie.

Ender’s Game ultimately has some solid strengths that separate it from competing Fall blockbusters like Thor: The Dark World. It’s a thinking viewer’s sci-fi blockbuster with a lot of brains and a very well-realized world. Unfortunately however, the movie feels too emotionally distant, and lacks excitement in the action sequences, making Ender’s Game ultimately feel like a movie with no real stakes, nor any long-term prospects as a series.

If you like the book and want to see the movie as a realization of the book, then it’s the best possible realization that one could ask for on the big screen. If you’re hoping for something more gripping, tense and raw however, then you may want to save your Fall blockbuster money for the many other more exciting blockbusters arriving throughout November and December.

I wouldn’t go as far as to say Ender’s Game was ultimately a dull movie, but it certainly could have done with being a little more enthusiastic about the story that Hollywood has worked so hard to adapt!