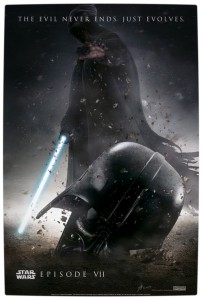 Star Wars fans, rejoice! Yesterday Lucasfilm announced the release date for Episode VII of the new Star Wars trilogy despite there being a lot of speculation over whether director J.J. Abrams and Disney could reach an agreement over the date.  While still well away,what better way to celebrate Christmas than with a new Star Wars film?

Sets and costumes are already being designed for the film, which starts shooting at London’s Pinewood Studios this coming spring. Alan Horn, Disney Studio Chief, spoke out about the speculations. “We’re very excited to share the official 2015 release date for Star Wars: Episode VII, where it will not only anchor the popular holiday filmgoing season, but also ensure our extraordinary filmmaking team has the time needed to deliver a sensational film.”

Amidst the news, Abrams also shed light on the decision to remove Michael Arndt (known for writing Little Miss Sunshine and Toy Story 3) as the primary screenwriter on the film.  Two weeks ago Abrams and Lawrence Kasdan (famous for co-writing The Empire Strikes Back,Return of the Jedi and Raiders of the Lost Ark) announced that they would be taking over, which lead to speculation as to whether the story would be ready in time for 2015.

“It became clear that given the time frame and given the process and the way things were going that working with Lawrence wasn’t going to get us where we needed to be, when we needed [it by],” stated Abrams yesterday during a conference call for his upcoming sci-fi series, Almost Human.  “Working with Lawrence, especially on a Star Wars movie, is kind of unbeatable.”