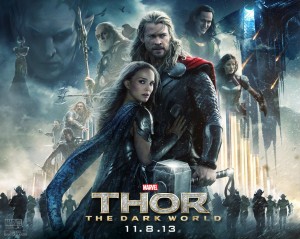 Phase Two of the Marvel Cinematic Universe continues with Thor: The Dark World!

Not just a sequel to 2011’s original Thor, the movie is also a continued exploration of the events following the alien invasion at the climax of The Avengers, this time from Thor’s perspective. Now that all of the necessary establishment for the character and his world is also out of the way after both of those movies, Thor: The Dark World is now allowed to really run with its premise and larger-than-life god-hero. As a result, the movie is far more grand and abstract than virtually any Marvel Studios movie to come before it, including The Avengers itself in several respects!

Most importantly however is that Thor: The Dark World continues Marvel Studios’ hot streak of excellent popcorn movie entertainment! It’s both an improved sequel that effectively expands on the ideas and foundation laid in Thor, and a top-quality continuation of Phase Two following this past May’s equally superb Iron Man 3!

The movie picks up two years after the events of The Avengers, with Thor and his battling companions, Lady Sif and The Warriors Three, fighting to maintain order amongst the chaos created across the Nine Realms, due to the Chitauri invasion of last year’s superhero crossover epic. All the while, Jane Foster is trying to continue with her life on Earth, keeping an ear to the ground for any trace of her lost Asgardian love all the while.

Amidst all of this, the Nine Realms are imminently about to align, which causes dimensional displacements that allow inadvertent teleportation between realms. The result unleashes an ancient weapon that Asgard had previously tried to seal away, also inviting an invasion by an evil race, the Dark Elves, led by Malekith the Accursed, who wishes to return the universe and all things to absolute darkness. 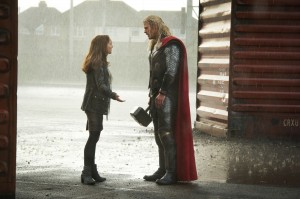 That’s a cliff’s notes version of the premise I can describe without any spoilers. Even just reading the synopsis, you can imagine that Thor: The Dark World is a very, very busy movie, and this can make its pace rather breathless. That being said, the movie is certainly never wanting for excitement!

One thing that immediately makes Thor: The Dark World feel like a bigger, bolder sequel is the fact that Thor is now allowed to fight with his full ability, having become a more wise and reliable hero after Thor and The Avengers. In the first movie, Thor spent the vast majority of proceedings without his powers, also a necessary evil to help establish the character on Earth as a lead-in to the crossover. Now however, his true potential is put to the test when he’s pitted against a force of otherwordly nature that seemingly can’t be stopped, even with the full might of the God of Thunder.

As you can imagine then, every action scene in Thor: The Dark World is absolutely superb, particularly considering how creative and varied they are! Despite the director change from Thor’s Kenneth Branagh to Alan Taylor, who has exclusively done television episodes up to this point, you’d never know that Taylor has never directed a mainstream feature film before, let alone a blockbuster as massive as this! Whether it’s a siege on Asgard or a super-powered punch-up on Earth, or a struggle in another realm entirely, the action scenes all have a very majestic, but earth-shattering feel. They’re all shot with a clean, confident style that is very appealing to watch! The climax is particularly impressive, as it presents a kind of dimensional-ripping clash that audiences have certainly never seen in a superhero movie before!

What makes the already fun and fast-paced action all the more relentlessly enjoyable is the fact that Marvel Studios’ reliably cheeky sense of humour still pops up frequently throughout proceedings. Yes, you could rightfully infer from the title alone that the sequel has a darker tone, and it certainly does in many places, but the bleaker drama never comes at the expense of the many frequent and amusing funny moments. This is further cemented by the sequel’s superb script, which juggles both comedic and dramatic beats remarkably well, even if a few jarring tonal shifts do occur every now and then.

In fact, the only real disappointing downside in the sequel is the fact that the villains are a bit boring. Christopher Eccleston is left to play a stock fantasy baddie as Malekith, wearing the heavy, imposing make-up very well, but suffering from ill-defined intentions and a surprising lack of personal stakes in the battle against Thor and Asgard. The Dark Elves are also faceless goons that only stand to get smacked around by Thor’s hammer. At least one reasonably interesting Dark Elf shows up in the form of Malekith’s second-in-command, Algrim, who transforms into the demonic and monstrous creature, Kurse, but it’s a let-down that he’s simply left to be Malekith’s lapdog and nothing else.

Thankfully, Tom Hiddleston does reprise his role as Thor’s adopted brother and arch-nemesis, Loki, even if he spends the entirety of the sequel’s first half locked away in Asgard’s dungeons. Continuing the schtick of the giddy, vaguely clownish trickster that he officially began running with in The Avengers, Hiddleston remains a highlight presence during all of his screentime, particularly keeping audiences on the edge of their seats when Thor is forced to enlist his aid, as the trailers teased. It’s a lot of fun to see Thor and Loki in action together again, especially as audiences will no doubt wait for the seemingly inevitable betrayal that defines Loki’s character.

Chris Hemsworth meanwhile continues to portray Thor excellently, with the character having matured significantly over the course of his two prior big screen appearances. He continues to have outstanding chemistry with Natalie Portman as Jane Foster, and it’s great to see Portman given a bit more to do in the action scenes, even if she still largely remains just a damsel-in-distress. Kat Dennings and Stellan Skarsgard also reprise their roles as Jane’s scientist buddies, Darcy Lewis and Erik Selvig respectively, even if both are relegated to the mere status of comic relief this time, particularly given how surprisingly little time the sequel actually spends on Earth, with the bulk of the runtime now taking place on Asgard.

On another note, I did see Thor: The Dark World in 3D, and, while it’s a slight improvement over the thoroughly awful 3D presentation in the original Thor, the sequel’s 3D remains a mostly sloppy and redundant post-conversion job. I don’t imagine that it gets much better in IMAX 3D, so, if you’re on a budget or could care less, you really don’t lose anything by just sticking with a 2D ticket this time. Captain America: The First Avenger and The Avengers both had solid 3D post-conversions, so I don’t understand why both this and Iron Man 3 suddenly ended up with terrible 3D jobs. 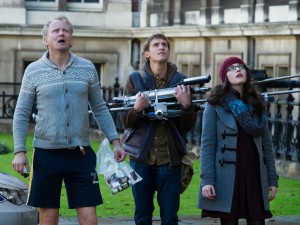 Oh, speaking of Captain America actually, Thor: The Dark World begins with an extended teaser of next year’s subsequent Marvel Studios offering, Captain America: The Winter Soldier, offering your first up-close glimpse of the titular villain to boot. It showcases much of the same footage from the recently-released theatrical teaser, but the added scenes should continue to get fans of the Marvel Cinematic Universe considerably excited!

Be sure to stick around after the credits as well, since there’s not one, but two post-credits sequences! The final scene after all of the credits is just an uplifting and amusing extended ending that’s good for a quick smile, but it’s the one between the main credits sequence and actual credit crawl that the Marvel faithful will especially want to pay attention to. I won’t spoil this scene of course, but I will say that it presents a very exciting development for future Marvel Studios movies, while giving you a first glimpse at a future portion of the Marvel Cinematic Universe that hasn’t been publicly shown before.

Stock villains and lousy 3D aside, Thor: The Dark World is a bigger and better sequel to the original Thor in every conceivable way! It’s a very grand, fast-paced movie that may feel a bit exhausting to people who aren’t prepared for its staggering scope, but it’s also a supreme amount of fun that is jam-packed with hard-hitting action, beautiful special effects and set pieces, and an irresistible sense of humour. It is a darker and more dramatic movie than its predecessor in many respects as well, but Thor: The Dark World remains fully aware of its place as superb popcorn entertainment, continuing Marvel Studios’ outstanding movie quality in Phase Two, and providing a highlight blockbuster for the Fall season of 2013!

Rejoice, fellow Marvelites! The God of Thunder has returned!