Not even champions escape the wrath of The Capitol.

After becoming the champions of the 74th annual Hunger Games of fictional dystopian world, Panem, where one male and one female adolescent from each of the twelve sectors are selected to fight to the death in a brutal competition, Katniss Everdeen (Jennifer Lawrence) and Peeta Mellark (Josh Hutcherson) live next door, but personally estranged. Forced to continue a false media love affair even after their victory, Katniss in particular soon becomes a symbol of hope and rebellion for the oppressed districts, paving the way for revolution in Panem.

Such is the premise of the much-anticipated sequel to last year’s The Hunger Games, the latest teen/young adult literature-inspired sensation to follow in the footsteps of Harry Potter and Twilight. The Hunger Games: Catching Fire brings back the first movie’s surviving cast, also promising an even more treacherous competition as The Capitol seeks vengeance for Katniss’s unwitting sedition, taking advantage of the third opportunity for a ‘Quarter Quell’.

You see, every twenty-five years, an extra special variation of The Hunger Games is put together by the twisted geniuses at The Capitol, being declared The Quarter Quell. With The Capitol wanting to take Katniss out and destroy her image as well, saving face for themselves of course, new game-maker, Plutarch Heavensbee (Philip Seymour Hoffman) suggests a very special Quarter Quell; Force a male and female tribute from the existing pool of Hunger Games champions to compete in the 75th games. This forces Katniss to compete by default, as she’s the sole female victor of District 12. 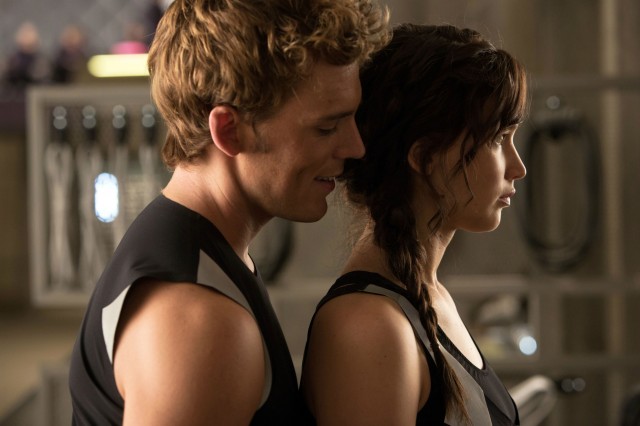 The idea of a new competition, this time between established winners, is a sound device for a sequel, which is why it’s unsurprising that this Quarter Quell has been front and center in most of Catching Fire’s trailers and marketing. Despite possible presumptions for those who haven’t read the source novel however, Catching Fire avoids feeling like a re-tread of its predecessor. It’s more exciting, more memorable and twice as intense as the first movie, with an even more noteworthy and dangerous set of tributes fighting both with and against Katniss, considering we’re now dealing entirely with people who have already won the games, and murdered plenty of other tributes already to do it!

Of course, even if the Quarter Quell is undeniably better than the already enjoyably intense Hunger Games competition from the first movie, there’s also the matter of getting to it however, as the tributes don’t take to the arena until the third act, naturally. Fortunately, even just exploring the aftermath of the first movie, Catching Fire never fails to be interesting and delightfully unsettling. This is particularly true when we get even more insight into the sickening debauchery and hedonistic apathy of The Capitol’s citizens.

With that said, there are a few tedious moments in the lead-up to the competition though, especially given Catching Fire’s staggering 146-minute runtime! This is yet another instance where it seems like the book’s rabid fanbase tied the editors’ hands behind their backs, as scenes from the novel are occasionally thrown in simply to please fans, even when they don’t flow at all with the movie’s narrative. For people who haven’t read the book especially, some of the early moments of Catching Fire in particular will just feel rather tedious, and like they don’t particularly go anywhere.

Liam Hemsworth’s returning love interest character, Gale Hawthorne remains the worst offender on this note. He still does absolutely nothing for the movie’s plot but take up screentime, inadvertently painting Katniss in a stomach-turning, Twilight-esque light when she also spends so much time leading on Peeta, especially later in the movie. The whole love triangle between Katniss, Gale and Peeta still feels very forced in the second movie, simply existing as a shameless attempt to pander to lovesick teenage fangirls. It was annoying when Twilight constantly did this, and it’s even worse when a movie series that’s actually good does it!

Fortunately, annoying love triangle and occasionally pointless scenes aside, Catching Fire is still a great sequel overall. You get a sense of progression and continuity, it effectively lays the groundwork for the inevitable battle against The Capitol that will comprise the two-part Mockingjay movies, and, like I said, it miraculously avoids re-treading the first movie, even with such a similar scenario and structure, which is very commendable! Even with a change in directors from Seabiscuit’s Gary Ross to I Am Legend’s Francis Lawrence, all of the actors remain at the top of their game too! 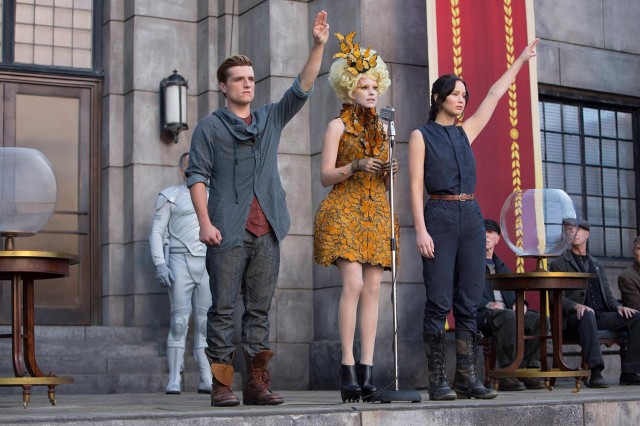 Some may also be happy to know that Lawrence has done away with the shaky cam from Ross’s direction in the first movie too. It does indeed result in cleaner, better-presented action scenes, with Catching Fire easily boasting better production values than its already well-polished predecessor.

On the note of polish actually, I did see Catching Fire in IMAX, which I was particularly excited for, given that certain pivotal scenes in the movie were filmed with IMAX cameras. Predictably, most of these scenes show up during the Quarter Quell, incorporating its various hazards to a very effective degree!… But nothing else. For the first two thirds of the movie, and even during the quieter scenes in the actual competition, the IMAX elements still add almost nothing to proceedings. Yes, Catching Fire’s IMAX cut is a noticeable improvement over the horrendous and forced IMAX cut of The Hunger Games, but it still feels mostly like a money grab, even with actual IMAX scenes shot for some of the third act. Unless you’re a huge fan with deep pockets, you’re probably still better off sticking with a standard digital screening.

Of course, this isn’t to say that Catching Fire is skimping on stunt and effects quality. There’s a very creative new setup with the arena that results in plenty more effects-driven mayhem, allowing Catching Fire to really showcase its effects budget like the first movie never could! The more competent and established selection of tributes also make for more surprising and unpredictable action sequences, resulting in an even greater sense of perpetual tension and distrust throughout the movie. Even before the competition, the liberal teases for who may or may not be on Katniss’s side are just as thrilling, creating a very strong sense of unrest within The Capitol that will lend naturally to the next two movies.

In fact, the climactic Mockingjay movies are ultimately what most works against Catching Fire. Most of this sequel’s flaws are small and inconsequential enough to easily overlook, but to non-fans of the book especially, only the conclusion will likely cause palpable frustration for viewers. In fact, there is no conclusion, nor resolution in Catching Fire.

For all of its effective momentum, excitement and tension, it’s very disappointing to see that Catching Fire ends on such a whimper. It suffers from a weak non-climax to start, then, rather than actually having a denouement and conclusion, it doesn’t end so much as just stop, telling the audience to come back next year for the next movie. The final line is even a dramatic reveal that doesn’t carry any emotional weight when it’s just treated as shameless sequel bait, with no real reaction or consequence shown for anyone before the credits just roll.

Yes, I’m aware that the book ended with this same cliffhanger, but this false ending really feels botched in the movie. It makes Catching Fire suffer from the aftertaste of ‘middle child syndrome’ in its trilogy of stories (two-part Mockingjay movies notwithstanding), merely being a bridge between the groundwork of The Hunger Games and the climax of Mockingjay, having no actual resolution or satisfying results accomplished on its own merits.

Still, all things considered, Catching Fire is a superb sequel where it counts. It’s a more exciting and more gripping follow-up to last year’s The Hunger Games that continues to effectively explore the dystopian plight of Panem, brought together by sharp direction, superb performances and plenty of tension. It boasts improved production values and an even more enjoyable deathmatch between its deadlier tributes, and, as much as it sometimes just has to stop and tease Mockingjay here and there, it does legitimately get you actively interested in seeing this saga through to its conclusion with the final two movies.

Even with its abrupt and unsatisfying ending, and even with its somewhat disappointing IMAX cut, I can say without hesitation that Catching Fire is even better than the original movie. You’ll need to watch the first movie to understand most of what’s going on in the second, but rarely do we get such an immediate movie sequel that so effectively manages to improve on an already strong foundation.