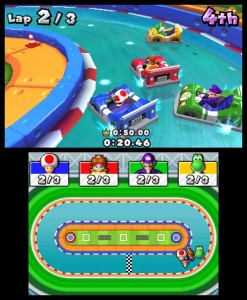 The Mario Party series has gone through several revamps since its beginnings on the N64 back in 1998. While not as cutthroat as it used to be, the series has maintained its charm over the years and is still one of the go-to games for multiplayer mini game fun. This being the thirteenth entry in the series, Mario Party: Island Tour isn’t the first foray in handheld territory, and despite some skepticism proved its worth in Mario Party DS. Did this one follow suit? Not exactly.

Much like past games in the series, Island Tour features a variety of game modes: eight party modes, three mini game modes, single-player Bowser’s Tower and some StreetPass mini games. If you’re not familiar, Party Mode is the core “campaign” where you and your friends can progress on one of many game boards, each divided by categories. On your journey you’ll compete against one another in several mini games which I’ll get more into later. The goal in all of this is to either get to the end of the board or collect the most mini-stars, as you might expect there’s more luck than skill involved.

The problem in all of this is that the experience feels broken, and doesn’t offer the sense of competition and backstabbery as in past games.  That’s pretty pivotal when playing Mario Party, or any competitive board game for that matter.  It’s almost as though Nintendo was trying to avoid any hurt feelings through it all, which is crazy considering the competition is part of the fun. 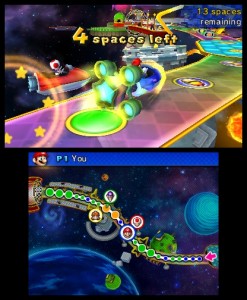 The mini games themselves are definitely a highlight and take advantage of the 3DS’ many capabilities — motion controls, touch screen, 3D, mic, dual screen and augmented reality all make an appearance. This variety keeps things interesting and fun, even hilarious, but can still be pretty broken at times.

That said, there are some boards that do break the mediocre mold with unique objectives or gameplay tools such as with Kamek’s Carpet Ride or Bowser’s Peculiar Peak.  Boards like these are a breath of fresh air and can make for some fun times with friends, but still doesn’t provide a complete experience.

As an alternative, there is the solo Bowser’s Tower which consists of thirty floors with a boss battle at ever fifth floor. While there are a few interesting boss battles in store, Bowser’s Tower lacks the challenge it so deserves and feels like a bland grinding session with little pay-off in the end.

As a multiplayer game, Island Tour definitely has lots of potential.  Through Download Play, up to four friends can painlessly play from one cart. However, the lack of online play and the lackluster single-player experience really drags things down.

It’s all pretty unfortunate considering how promising Island Tour is, but no matter which way you turn, nothing in this game proves to be particularly entertaining. By now I would have expected something bigger and bolder from Nintendo. If you’re looking for an overall fun experience, stick with Mario Party DS or the console releases. Things may have changed since the series’ inception, but that shouldn’t take away from the fun of it all.

Mario Party: Island Tour Review
It's all pretty unfortunate: nothing in this game proves to be particularly entertaining. Things may have changed since the series' inception, but that shouldn't take away from the fun of it all.
VISUALS70%
AUDIO70%
GAMEPLAY40%
The GOOD STUFF
The NOT-SO-GOOD STUFF
2013-12-14
60%Overall Score
Reader Rating: (0 Votes)
0%