Media Molecule made it big with their uber-successful and now PlayStation-mascot worthy franchise LittleBigPlanet. Their whimsical worlds, imaginative storylines, and adorable characters made the world of LBP pop off the screen of the PlayStation 3 (and later, the PlayStation Vita). Their Karting spinoff wasn’t the best game ever, but even it had some high points.

Lately, Media Molecule has been hard at work on a new property. A property to distance themselves from LittleBigPlanet or simply to get the creative juices flowing, we don’t know, but we can tell you that the latter has certainly manifested itself in the company’s latest game called Tearaway.

Much like LBP, Media Molecule went in an atypical direction for the basis of Tearaway. It isn’t based in anything realistic, really, but rather, the entire world that exists is made up of sheets of paper. Papercraft, to be exact; the art of making real-life objects from paper. A sort of origami, you might say.

The opening of Tearaway features a familiar British voice; something we’ve heard in the LittleBigPlanet series before. It was very comforting, and the familiarity lends itself well to making the player feel comfortable in this new world.

Doing something unique in any game is a risk. There is always the chance that the game’s fan base will hate what they’re looking at, but when that’s not the case, the payoff can be even grander. The papercraft art style of Tearaway is what makes the game what it is. Beautiful coloured paper shapes the world around your character and it manages to make everything feel just slightly fragile, which isn’t something we’ve experienced before.

We’d love to be able to compare the style of the graphics to, well, any other game on the planet, but the only one we can really draw any comparisons to is LittleBigPlanet. The game worlds are remarkably different, but they feel interconnected because of their roots in paper. (Don’t forget: a lot of LBP‘s world was created around cardboard.)

Little details are where Tearaway shines, and it is these details that can be hard to find but make the game that much more beautiful. Raindrops, for example, come down as little strips of blue and teal-coloured paper, but then explode into the ground as five or six more strips come bursting up as its ripple. The whole world has what seems to be real physics applied to it, despite its nature as a two-dimensional landscape.

You won’t find a lot of shadows or high-brow lighting effects in Tearaway, but the world is more alive because of it. Sure, there is the occasional lens flare from the sun, but the matte and pastel-based palette of colours really lends well to a thoughtfully-designed world.

Acoustically, Tearaway is not the most symphonic game we’ve ever played, but considering its birth on a handheld platform, the audio engineers should really be applauded for the mood they were able to achieve. There’s no real overarching score, but the sound effects of platforms moving or paper unrolling are second to none. It’s clear that Media Molecule has foley artists who know what they’re doing. 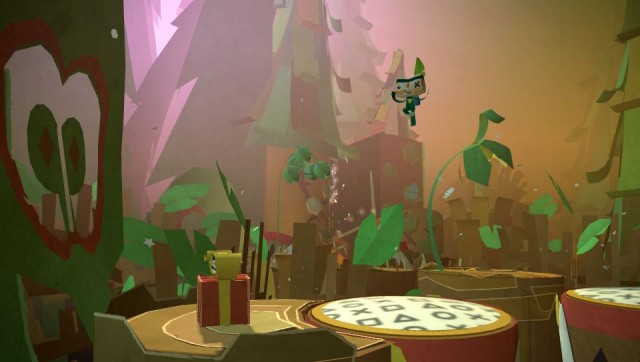 The game that Tearaway tends to get compared to is Mario, and while we can see why the comparison is made (see the Gameplay section, below), it isn’t fair to say that the game doesn’t have a great theme because it isn’t as memorable as everyone’s favourite Italian plumber. That doesn’t mean the audio soundtrack is stellar, but it’s rather forgettable.

The voiceover audio in Tearaway, however, is nothing short of wonderful. The few voices that narrate the world are soothing and comforting, with foreign accents that charm their way into your soul. Yes, they’re that wonderful.

Where Tearaway lacks in its background score, it more than makes up for in gameplay. Reminiscent of a traditional Mario experience if only for its platforming, Tearaway is a marvel in the way you interact with your console.

The game takes into account virtually every feature of the PlayStation Vita and puts it to great use. Yes, even the rear touchpad.

The front-facing camera is often used to put the player’s face in the centre of the sun in the game, making you appear to be the god looking over the world. The touch screen is used to interact with little scraps of paper that can get in your way and hinder your movement forward through a level. The rear touchpad is brilliantly used to have fingers pop up through the bottom of the world to raise or move platforms, or eliminate enemies along your path.

The entire game feels very, for lack of a better word, platformy. There are a lot of areas that open themselves up once a switch has been hit, a few run-before-the-floor-falls-through sequences, and more than the game’s fair share of jumping between moving platforms to get to the other side of the room.

With that said, however, it has all been designed wonderfully around the paper theme. In fact, some characters and objects in the game become unlockable papercraft figures that you can print and build from actual paper! That is ingenious design, that is.

The only negative we really noticed while playing the game was a slight lack of control when throwing some objects. In fact, in a certain place, we threw an apple off a ledge, missing the basket we were targeting, and it was impossible to continue from there without reverting to the beginning of the entire level. It was a pretty major setback, so it certainly hinders our ability to score the game perfectly, though it was a minor blemish on what is an otherwise stellar record for the game.

The entire Tearaway experience is beautiful, though it is hindered by a few game-breaking glitches. They’re not enough to overlook the title, however, as Tearaway is an absolute must-have for anyone with a PlayStation Vita.

Tearaway Review
Save for a game-breaking bug or two, Tearaway is a fantastic experience for anyone with a PlayStation Vita. The world is unique, beautifully designed, and full of heart in ways that many other games just aren't.
VISUALS85%
AUDIO78%
GAMEPLAY90%
THE GOOD STUFF
THE NOT-SO-GOOD STUFF
2013-12-16
84%Overall Score
Reader Rating: (0 Votes)
0%