Making good on a Twitter tease from yesterday, director, Zack Snyder has officially unveiled our first look at Ben Affleck in costume as Batman, as well as the new incarnation of the Batmobile via his Twitter account! Both will be featured in the upcoming formally untitled sequel to Man of Steel, set to debut on May 6th, 2016.

You can check out the monochromatic reveal image below: 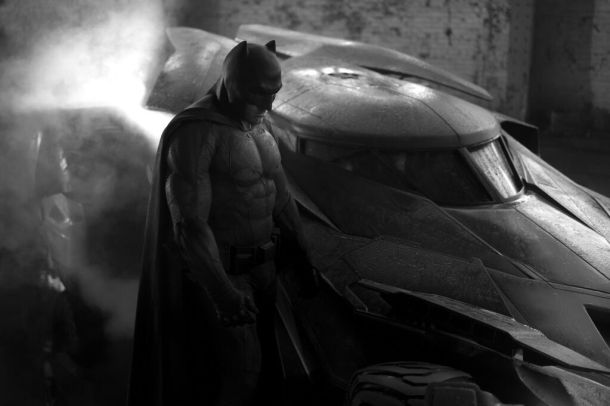 Any Batman fan worth their salt will immediately draw comparisons to the more bulky, imposing costume from Frank Miller’s acclaimed graphic novel, The Dark Knight Returns and its successors, with this design having yet to be realized in live-action. Former Batman movie costumes were often thinner and form-fitting, with the Batsuit from Christopher Nolan’s trilogy being armoured, but still built primarily for agility. It would appear that Snyder is indeed trying to re-invent how audiences perceive a big screen Dark Knight with his upcoming DC Cinematic Universe sequel, and Ben Affleck appears to have gotten pretty bulky to fit the heavier new costume too.

Only esteemed geek comedian, Kevin Smith and Ben Affleck’s better half, Jennifer Garner were allowed a sneak peek at the new costume before this public unveiling. Both were very pleased with it, and both declared that it was something entirely new and exciting for the character on film. It would appear that they weren’t crying wolf either.

Of course, equally exciting is our first look at Affleck’s Batmobile, which isn’t as clearly presented amidst the costume being front-and-center, but we can still glean a few details. It would appear that the new design is something of a hybrid between the more ostentatious Batmobile from the Tim Burton/Joel Schumacher movies, and the more practical, tank-like ‘Tumbler’ from Christopher Nolan’s Dark Knight trilogy. The wheels are massive, no doubt teasing some off-roading that the vehicle is no doubt easily capable of, but the spoilers at the top and general sleek outward plating still give a sense of the kind of speed and precision that the Batmobile can pull off as well.

What do you think of the new design for the costume and Batmobile? Do you think that the use of Frank Miller’s Batman costume is a good idea or a bad idea? Does Ben Affleck truly look the part, now that you’ve seen him in costume and battle-ready? As usual, your comments are welcome below.

Eggplante’s continuing to fly you your news on the Man of Steel sequel, and the DC Cinematic Universe at large.