Redemption. If Mario Kart 8 were to have a subtitle, that would be it.

Look, Mario Kart 7 just didn’t jive with what was expected of the behemoth franchise. Sure, lots of people loved it, but it was such a mixed bag of reused tropes and superficial improvements that it just wasn’t enjoyable for us.

Mario Kart 8 flips that on its head. Literally.

Forget what people say about Nintendo not having some incredible looking games. Mario Kart 8 is without a doubt the best looking Mario Kart game the company has ever produced, not to mention the best use of lighting, shading, motion, and effects in any Nintendo game.

As Yoshi, Mario, or any of a ton of other characters whiz through the remarkably well-thought out tracks, there’s a real sense of speed that has–dare we say–never been achieved in a Mario Kart game before. The game isn’t exactly built to fulfill dreams of Aston Martins or Lamborghinis, so that the team was able to put go-carts, ATVs, and motorcycles on a screen, riddle them with parachutes and hang-gliders, and toss in a bunch of goofy-looking mascots, and still make you feel like you’re travelling at 150 miles per hour is a feat unto itself.

Lighting might not be something you think of as an important factor in a Mario Kart game, but when it’s done right, it can make a world of difference in the mood of a level. In one particularly gorgeous level, a giant Bowser made of lava stomps his fist down on the track. The resulting lighting, shadows, and particle effects are something we never expected from a Wii U title, let alone one from Nintendo itself. 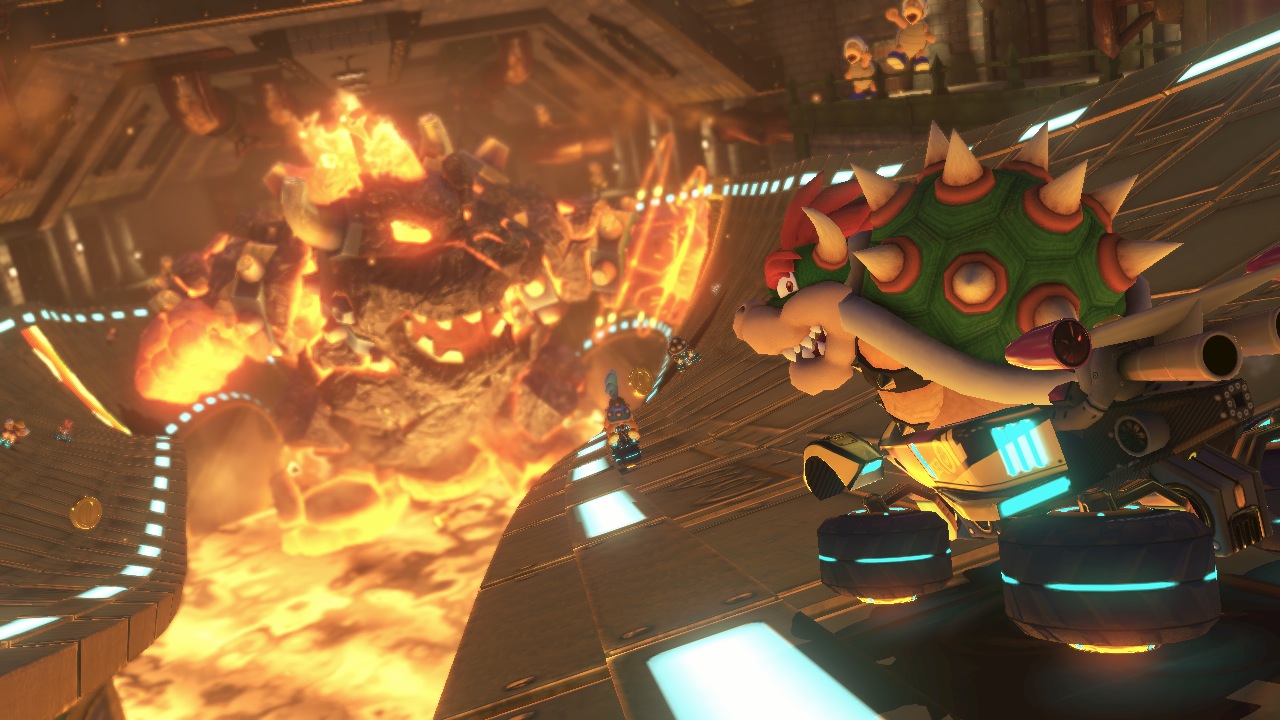 Then there’s the stylized look of the game. When hurling yourself onto a wall and jumping into anti-gravity mode, the game only slightly shifts perspectives. You’re always in the driver’s seat, but the screen is offset slightly, as if you’re tilting your head. That’s the only way it would be possible to play the game, though in replays, the track itself is always gravity-up, making the character appear upside down all over the place, a visual device that is breathtaking in its simplicity.

All is well and good that the graphics are beautiful, but beware if you’re planning on getting this thing going with three or more people at once. It’s not visually jarring, but the framerate in the game will drop just enough to make something oddly difficult to play. It doesn’t happen online, so it is very much a hardware issue; the Wii U just can’t handle more than two inputs and so many things going on at once on screen. It’s sad, too, because local four player races is what Mario Kart is all about.

Good. Classic Mario Kart. Nothing to write home about, but that’s not bad, either.

Really, Mario Kart isn’t known for incredible set piece audio or anything of the sort. The audio in the game is what you would expect: music themed to the track you’re playing, with special effects for falling of cliff edges and getting stomped on added in with a heavy hand.

Gameplay, undoubtedly, is where Mario Kart 8 shines. Getting back to its roots, but adding plenty of new features, the latest evolution of Mario Kart gets first place every time.

You know the game: race through Mario-themed tracks, collecting weapons and power-ups to slow down your opponents or speed yourself up, and get to the finish line first. That’s all there. But what’s changed is everything in between.

Let’s start with the part that really turns the game on its head: gravity. Or, rather, a lack of it. 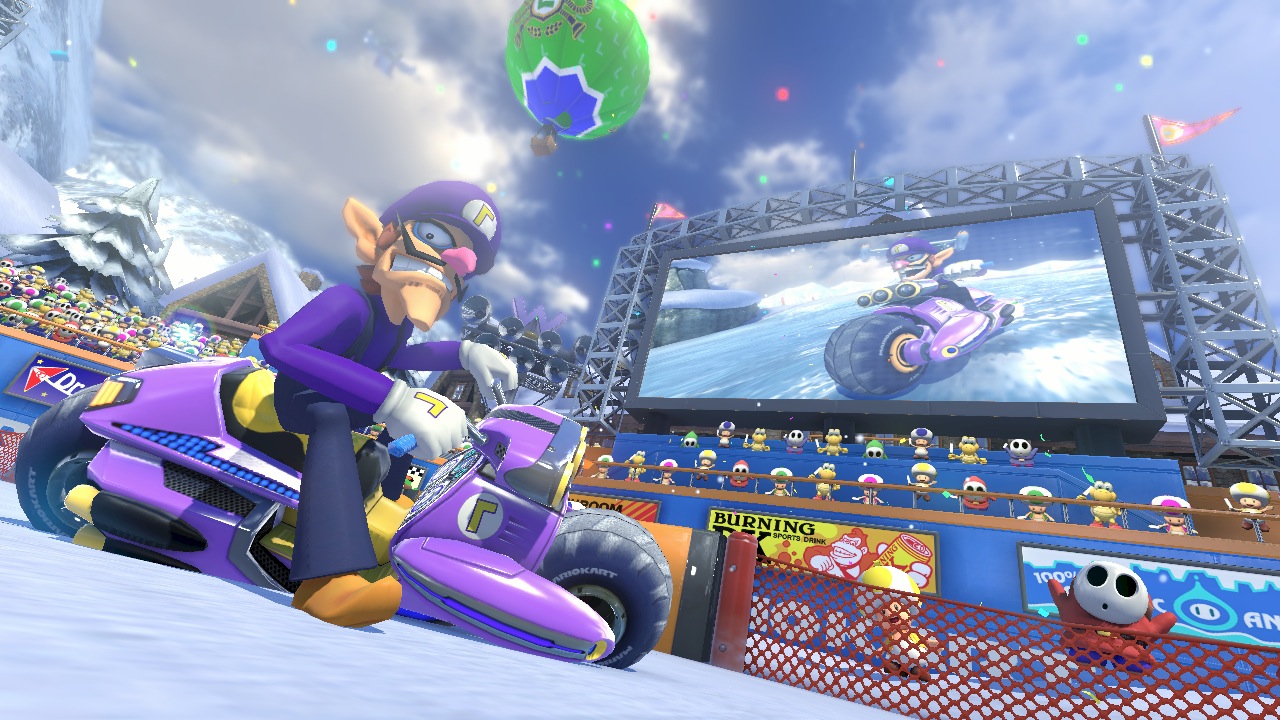 Passing over a yellow strip on the track will speed up your kart, while the newly-introduced blue strip will cause your kart’s wheels to rotate, transforming the vehicle into a hovercraft of sorts. It works remarkably well, and it’s some of the most fun that’s to be had in Mario Kart in years.

Drifting and hitting other drivers while in anti-gravity mode will cause the kart to boost forward, and there are boost posts along some tracks that will also give racers some speed, adding more strategy to the game than there ever has been.

As a core-racing experience, Mario Kart is one of the simpler titles on the market. But it’s not supposed to be Forza or Gran Turismo. This is Mario Kart, and what it might lack in car brands, it makes up for in track design, controller options, and power-ups.

The tracks in traditional racing games are limited by physics, whereas the latest entry in the Mario Kart franchise allows for not only anti-gravity sections, but gliding vehicles over vast canyons, racing underwater, and even maneuvering through a spinning ferris wheel.

The best example of an anti-gravity track is Mario Kart Stadium, the first track in the entire game. It features a ridiculous roller coaster-style loop, and it takes place in what looks like it used to be Wario Stadium in Mario Kart 64. It needs to be seen to be believed:

Controlling the characters of Mario Kart 8 (which now includes all eight Koopalings, by the way) couldn’t be easier or more tailored to you. There are five ways to control the game: Wii U GamePad (with either the analog stick or motion controls), Wii Remote, Wii Wheel, or Classic Controller. It’s a bit nuts, but no one can say Nintendo doesn’t give its players options.

New items in Mario Kart all have the same whimsy and free-spirit of the classics (yes, even the blue shell). The new Boomerang is a classic Mario item that is more powerful and effective than a red shell, and can be deadly at medium to long range. Our favourite of the new items is the Piranha Plant, which speeds up the kart and simultaneously deflects any incoming shells or other intercepts like fireballs. The super horn is also a great way to knock out anyone close to you, especially if you’re neck-and-neck in the lead up to the final checkered flag.

Mario Kart 8 is a wonderful return to form for the series. It shows a creative spirit, wonderful amounts of innovation, and a breath of fresh air from Nintendo, even if it is a long-running series.

With the breadth of new characters, incredible track design, and a monumental amount of detail for a game like this, Mario Kart 8 just became the best party game on Wii U, while simultaneously knocking Super Mario 3D World off the top spot of best Wii U games.

Mario Kart 8 Review
Mario Kart 8 returns to the imaginative, innovative, creative fun that brought the series to life. One of the best reasons to own a Wii U, Nintendo gets almost everything right with this one.
VISUALS95%
AUDIO85%
GAMEPLAY95%
The GOOD STUFF
More GOOD STUFF
2014-05-30
92%Overall Score
Reader Rating: (1 Vote)
95%