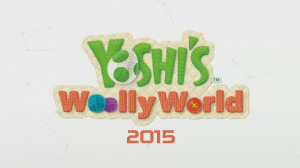 Very early in 2013, Nintendo showed a single teaser image of a yarn-styled Yoshi during a Nintendo Direct broadcast, a tease of what was apparently meant to be a spiritual successor by developer, Good-Feel to their 2010 Wii game, Kirby’s Epic Yarn. Finally, over a year-and-a-half later, the concept has been unmasked as a Wii U game called Yoshi’s Woolly World, and it’s set to release in early 2015.

Yoshi’s Woolly World may feel true to the spirit and style of Kirby’s Epic Yarn, but it’s a Yoshi game through and through. Players are able to gather trails of yarn balls, substituting for Yoshi Eggs, hover-jump, and perform other functions that should be familiar to players of Yoshi’s previous games. Yoshi’s Woolly World also marks only the second time that Yoshi has been the sole protagonist of a platformer, following Yoshi’s Story on the Nintendo 64, way back in 1998.

As the yarn-style Yoshi proceeds through each level, he can eat up enemies to gradually turn into a three-dimensional, crochet-like style. Naturally, Yoshi’s long, flexible tongue will continue to be a key asset in doing so. Of course, that won’t be Yoshi’s only asset, as he will need to use his yarn balls to pull apart and sew together obstacles to create new paths and incapacitate enemies across each level.

Players can even summon an ally to play with them in local co-op, similar to Kirby and Prince Fluff in Kirby’s Epic Yarn. By gobbling up and regurgitating your friend into hard-to-reach places, you can work together to get ahold of goodies and new areas that are otherwise virtually impossible to access.

The premise behind the game is currently unknown, most notably how Yoshi finds himself in this yarn-like world, but hopefully we’ll find out soon. Nintendo claims that Yoshi’s Woolly World is currently less than a year away, even if it still won’t be releasing before 2015. 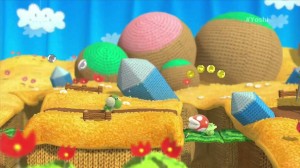 Fortunately, this year already saw the release of a new Yoshi game, that being Yoshi’s New Island on the 3DS, a game that we felt was a bit underwhelming, but still reasonably enjoyable.

Eggplante is continuing to thread your updates on Yoshi’s Woolly World, so check back with us for news about this adorable new Wii U platformer.