We had a chance to play LittleBigPlanet 3 on the show floor at E3 this week, and what we came away with is the feeling that we’re playing the same game we’ve always been playing, albeit with a few new friends.

Given that LittleBigPlanet has never been a game about realistic visuals or accurate portrayal of the world. It doesn’t even take place on Earth, really. Unless you count cardboard cutouts and construction paper on a school desk Earth. But no matter, that style has always worked for the series because it’s cute as hell.

But how does it play into LittleBigPlanet 3? Well, it’s the same game, for the third time in a row (fourth, if you count the Vita game), and while the visuals are certainly still cute, there’s no feel of a big next-gen upgrade. 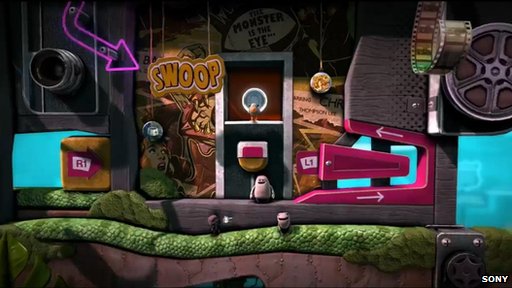 The new characters are the big draw here, however. Alongside Sackboy, we get the new frog Oddsock, bird-like Swoop, and transforming Toggle.

We played as Toggle in a single-player level. He’s a character that, at the touch of a button, can become a small and light little guy or grow in size and weight. Toggling between big and small Toggle allows the player the creativity to solve puzzles, such as running across the surface of a puddle, or pushing a heavy block with his brute strength.

The game was quite fun, and it has been a while since the last real LittleBigPlanet game, so while there’s no huge difference in overall scope that we could gather from a 15-minute demo, maybe it doesn’t need it. LittleBigPlanet 3 has some interesting new characters, each allowing for new gameplay mechanics, and extending the series, though marginally, into the next-generation.

Before the game’s launch, we’re expecting to see more from LittleBigPlanet 3, and when we do, we’ll let you know all about what we find.