Japanese independent developer, PlatinumGames has just announced a surprising new project! They’ll be taking the reins of a third-person action game inspired by the Nickelodeon-produced Legend of Korra animated series, set to release this Fall. Activision is set to publish. 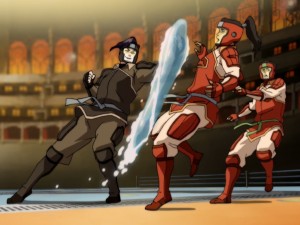 This will mark the first dedicated video game release for The Legend of Korra, a sequel series to Avatar: The Last Airbender, starring former main protagonist, Aang’s reincarnation and successor, Korra. This new game will take place between the series’ second and third seasons with an original new story to be penned by series writer, Tim Hedrick, and will have players taking control of Korra, using her elemental bending powers to manipulate fire, earth, air and water against familiar enemies from the show, including Mecha Tanks and Chi Blockers.

Like its predecessor show, The Legend of Korra has enjoyed widespread critical acclaim and high ratings, so the news of a video game adaptation should certainly be exciting news for fans young and old. Given that PlatinumGames specializes in fast-paced and stylized action games as well, the game should hopefully turn out quite well to boot.

Development of The Legend of Korra appears to be simultaneous with PlatinumGames’ next major game release, the Wii U-exclusive Bayonetta 2, which comes to Japan on September 20th, and releases in North America and Europe this October. Juggling these two projects will likely also temporarily stall the development of PlatinumGames’ newly-announced Scalebound as well, an upcoming Xbox One exclusive that Microsoft announced during their E3 2014 keynote, and will be publishing themselves. Currently, Scalebound has no release window.

The Legend of Korra is set to release on PC, Xbox 360, PlayStation 3, PlayStation 4, and Xbox One. Unfortunately, it doesn’t seem like the game will be releasing on Wii U.

Nintendo gamers with a love of the source series won’t be completely left out in the cold though! A separate video game adaptation of The Legend of Korra is being developed for release around the same time as the action game by PlatinumGames, developed by Webfoot Technologies. This will be a turn-based strategy game exclusively planned for release on the Nintendo 3DS, though details on it were far more scant than the action game being made for consoles.

Don’t forget as well that the third season, or ‘Book’ of The Legend of Korra starts this Friday, June 27th! Catch it on Nickelodeon.

Eggplante will be keeping an eye on all news and updates related to The Legend of Korra.