Publisher, Deep Silver has just announced today that yet another new offshoot will be added to the list of upcoming games in the zombie-themed series, a single-player-only mystery-adventure game called Escape Dead Island. Players will take control of a reporter, Cliff Calo, as he lands on the island of Nara Pela, another spot of land that is part of the archipelago housing the original Dead Island’s setting, Banoi.

That’s not all though! Cliff isn’t exactly seeing things clearly, as he’ll be plagued with hallucinations throughout his adventure, including oceans turning into blood, tears in the apparent fabric of reality, and even false deaths meant to elicit player scares, which will simply have him waking up anew, sometimes with a new batch of allies who claim he was with them the entire time. What’s wrong with our protagonist? That appears to be the ‘mystery’ part of this mystery-adventure. 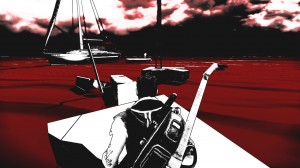 Beyond that however, the game will feature open-ended, adventure game-like exploration, reminiscent of The Legend of Zelda. Players will gain new tools such as grappling hooks that will allow them to cross into new territory and gradually unfold more of the story. Those that felt that the previous Dead Island games didn’t place enough of an emphasis on story will be happy to hear that much more focus on the plot will be featured in Escape Dead Island as well.

Combat, on the other hand, will be much more strategic and context-sensitive, with Cliff having to employ stealth and carefully attack enemies with unseen blows, meaning that Escape Dead Island will actually be decreasing the emphasis on caving in zombie skulls this time. Much of the time however, it’s better to avoid a fight, or simply turn tail and run, as Cliff is very vulnerable, and can be killed quite easily!

Escape Dead Island is one of three upcoming releases in Deep Silver’s rapidly growing franchise. Dead Island: Epidemic, a PC-exclusive MOBA where three teams battle for survival against the undead, and each other, is currently in open beta on Steam Early Access, with a full-blown sequel, Dead Island 2, being announced at Sony’s E3 2014 press conference last month. Anyone who pre-orders Escape Dead Island at participating retailers will be guaranteed beta access to Dead Island 2, though it’s unclear as to whether this is the same beta that was talked up at Sony’s E3 2014 press keynote, particularly since that beta will be exclusively hosted on PlayStation 4.

Escape Dead Island meanwhile is coming to PC, Xbox 360 and PlayStation 3 this Fall, with no release planned on the PlayStation 4 or Xbox One. It joins 2K Games’ Borderlands: The Pre-Sequel! as one of the few remaining high-profile game releases being explicitly made for last-gen consoles this year.

Eggplante will continue to shamble you your news on all things Dead Island.