UPDATE: The CW has followed up their announcement of Devon Aoki’s casting by confirming that Karl Yune will portray the character’s husband, Maseo Yamashiro. This means that Katana won’t be widowed during her appearance in Oliver’s flashbacks in the third season, since Maseo is confirmed to be Oliver’s ‘handler’, and will play his own part in shaping him into the future protector of Starling City.

Katana is a superb martial artist with the ability to capture the souls of those her blade kills. In the DC Universe, this includes that of her own husband, just one of innumerable souls that she can communicate with and draw power from. In Arrow however, it’s likely that this element of her character will be removed for a more grounded portrayal. 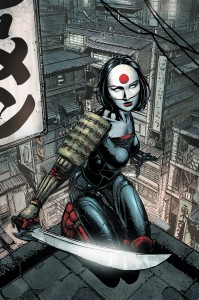 Aoki’s Katana will play a key role in protagonist, Oliver Queen’s flashback sequences, a series trademark since the show’s first episodes, detailing his transformative backstory from rich, spoiled playboy to Starling City’s feared vigilante, The Arrow, while marooned away from civilization on a hostile deserted island. While these sequences have taken place during the course of several years on the island so far, consistent with Oliver’s comic book backstory as superhero, Green Arrow, the conclusion of the show’s second season saw Oliver’s flashbacks take him to Hong Kong, where he presumably meets Katana.

The CW claims that Katana will be a mentor character, and will be, “A critical influence on [Oliver’s] journey to eventually become The Arrow in the present day.” Make of that what you will.

Arrow’s third season is set to premiere on October 8th of this year, with a spin-off set in the same DC-inspired television universe, The Flash, premiering a day previously on October 7th.

Eggplante is continuing to shoot you your news and updates related to Arrow.