Bandai Namco has just made the announcement of when we can expect one of several upcoming Tales games to debut in North America, and the first to release on Sony’s handheld platform in the West! Tales of Hearts R is officially releasing exclusively for PlayStation Vita in Canada and the U.S. on November 14th of this year.

Tales of Hearts R follows Kor, who is watching the house of his grandfather while living a quiet life in a seaside village. One day however, a young girl named Kohaku comes looking for Kor’s grandfather, and is attacked by a witch, resulting in her heart and soul being shattered when Kor attempts to remedy the situation. Taking up the Soma, a weapon given to him by his grandfather, Kor must now journey across the world to restore Kohaku to her rightful state.

While the English localization of the game, one of numerous in the Tales series lately, is exciting news, it comes with a controversial condition; No English dub. The game’s text and subtitles will be in full English, but the voiceovers that play throughout the game will still be in Japanese, with no option to switch them to English. Apparently, it was the fans that decided this as well, since Bandai Namco could only do one language or the other for the voices, and more fans apparently wanted subs than dubs.

For sub purists, this is well and good, but for those who prefer English dubs in their Japanese RPG’s, this may be a bit of an unfortunate sacrifice to have Tales of Hearts R released outside of Japan, particularly since all other recent Tales game releases have featured well-done English voiceovers. 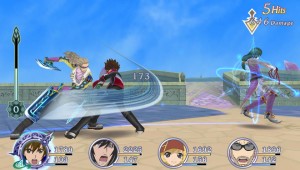 In any case, Tales of Hearts R will mark the first time that Tales of Hearts has been made available outside of its native Japan. The game was originally released for the Nintendo DS in 2008, in Japan only, and came in two incarnations; One with CG-style FMV scenes, and the other with anime-style FMV scenes. The game was then remastered for PlayStation Vita in 2013 as Tales of Hearts R, with improved, fully three-dimensional graphics, trophies, two all-new party members, and full Japanese voiceovers throughout the entire game, which will all be maintained in the Western release. An iOS version of Tales of Hearts is also exclusively available in Japan as of 2013, but this build has virtually no chance of being localized anywhere else.

2014 has been a remarkably busy year for the Tales franchise, with remastered PlayStation 3 upgrades of Tales of Symphonia and Tales of Symphonia: Dawn of the New World arriving in a bundle this past February within retail package, Tales of Symphonia Chronicles, as well as separately on the PlayStation Store. A direct follow-up to one of last year’s releases in the series, Tales of Xillia 2, is also set to release on August 19th in North America, exclusively for PlayStation 3. Finally, the series’ newly-announced Tales of Zestiria, yet again a PlayStation 3 exclusive, was also confirmed to be released in the West, though it will no doubt arrive until later next year at the earliest.

We at Eggplante will keep spinning your news and updates related to the Tales franchise.