A beloved retro feature is about to make a return in this November’s upcoming Pokemon remakes, Pokemon Omega Ruby and Pokemon Alpha Sapphire. 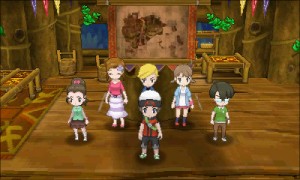 Secret Bases, a feature of the original Pokemon Ruby Version and Pokemon Sapphire Version on the Game Boy Advance, are set to return in the remakes. Better still is that they’ll now take advantage of the 3DS’s StreetPass capabilities, along with QR code functionality, giving players more means than ever to share their customizable spaces, and allow other players to derive rewards from them.

When players meet other people while visiting someone else’s Secret Base, they can become Secret Pals in Pokemon Omega Ruby and Pokemon Alpha Sapphire. Secret Pals can be used for battle practice, though they can also give you support abilities, such as shared decorations, increasing your Pokemon team’s levels, or allowing you to hatch Pokemon Eggs faster. These appear to be very similar to the StreetPass-enabled O-Powers from Pokemon X and Pokemon Y, particularly since they grow in effectiveness as players meet and make more Secret Pals.

You will also be able to grab flags from other players’ Secret Base PC’s and return them to your own Secret Base to further boost skills normally awarded to you by accumulating Secret Pals. It would appear then that both co-operation and competition is fair game between more social trainers!

Like their Game Boy Advance inspirations, Pokemon Omega Ruby and Pokemon Alpha Sapphire will take players to the Hoenn Region. Both games will be detailed remasters of their originals, with new, fully 3D adventures, enhanced 3DS features, and new forms of the Mega Evolution mechanic that was introduced in Pokemon X and Pokemon Y. Sableye and Metagross have been confirmed to receive a new Mega Evolution in the remakes, with legendary Pokemon, Groudon and Kyogre pioneering an all-new form of Mega Evolution called ‘Primal Reversion’, with their so-called ‘Primal Forms’ emblazoned on the covers of the remakes.

Eggplante will continue to catch your news and updates related to the Pokemon series.