Concerned about the ravenously anticipated remastering of Grim Fandango skipping out on you due to its PlayStation exclusivity? Well, you may have another option!

Taking to Twitter recently, developer, Double Fine confirmed that the Grim Fandango remaster would also be coming to PC, Mac and Linux, on top of PlayStation 4 and PlayStation Vita, which it was initially announced for during Sony’s E3 2014 press conference last month. This should hopefully give people preferring to game on a computer, as well as Xbox and Nintendo gamers with at least moderately gaming-ready computers, a chance to experience the cult classic, either for the first time, or after many, many years.

Unfortunately however, those holding out for Xbox and Nintendo releases of the Grim Fandango remaster, even later on, would seem to be out of luck. The game has been re-affirmed as a PlayStation exclusive in the console and handheld space, and doesn’t even appear to be coming to PlayStation 3 at that. There are no plans to release the Grim Fandango remaster on platforms like Xbox One or Wii U at all. Bummer.

Despite its initial commercial failure as a PC exclusive in 1998, which was bad to the point of contributing to former developer, LucasArts abandoning development of original adventure games shortly before the 2000’s, Grim Fandango was very well received by game critics, and has remained a cult classic amongst PC adventure enthusiasts. The game combines Aztec death lore with noir, detective-style gameplay, and was directed by Double Fine boss, Tim Schafer, before he left LucasArts to form the Psychonauts and Brutal Legend developer. 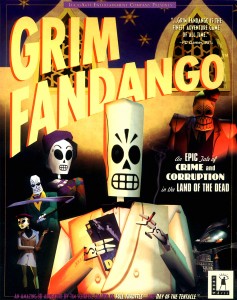 It’s fitting then that Schafer himself would give Grim Fandango a second lease on life, with his own Double Fine Productions developing the remaster. While the Grim Fandango remaster is currently without a release date, it’s sure to be an exciting release indeed when it does arrive, hopefully capturing a much larger audience the second time.

Eggplante remains committed to digging up your news and updates related to Grim Fandango.