Sega and Cartoon Network took the internet by storm when Sonic Boom was unveiled, a huge multimedia reboot that aims to contemporize Sega’s flagship mascot, Sonic the Hedgehog for a whole new audience of kids.

Old-school Sega enthusiasts were mostly outraged at the announced Cartoon Network show’s changes to character designs and the core workings of Sonic’s universe, but mostly went from enraged to mildly annoyed when Sega clarified that the old guard at Sonic Team would be maintaining the classic series, with Sonic Boom being exclusive to the West, and not even reaching Japan at all.

Regardless, Sonic the Hedgehog game collectors have been given not one, but two video game tie-ins to Sonic Boom to watch for, Sonic Boom: Shattered Crystal on Nintendo 3DS by Sanzaru Games, and Sonic Boom: Rise of Lyric on Wii U by Big Red Button Entertainment. Sega has now confirmed when they’re releasing as well. 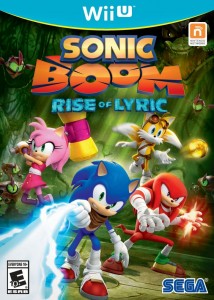 Sonic Boom: Shattered Crystal will arrive first for 3DS on November 11th of this year, while Sonic Boom: Rise of Lyric will come to Wii U a week later, on November 18th. These games mark the third and final collaboration in an exclusive deal between Sega and Nintendo to have the next three games featuring Sonic be exclusive to Nintendo devices. The first two products of the deal were Sonic: Lost World on 3DS and Wii U, and Mario & Sonic at the Sochi 2014 Olympic Winter Games on Wii U.

Both of the Sonic Boom games are action games that will shift the focus of Sonic’s revamped adventures a lot more towards exploration and combat, rather than twitch platforming. Characters have different abilities that allow them to reach different places (i.e. Tails can fly and use gadgets, Knuckles can burrow underground and climb walls, and Sonic himself has enhanced speed and can home in on enemies), with Amy Rose being exclusive to Rise of Lyric, and all-new character, Sticks being exclusive to Shattered Crystal. 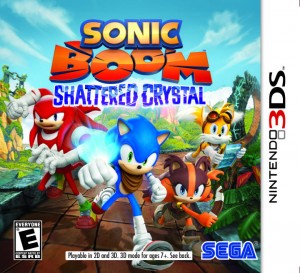 Both games will also have minor story differences, naturally, with Rise of Lyric boasting exclusive co-op and multiplayer elements for 2-4 players as well. Predictably, Rise of Lyric is a three-dimensional game, while Shattered Crystal unfolds in classic 2D action. Rise of Lyric will also push the Wii U’s apparent technical and visual capabilities, since it’s powered by the rather mighty CryEngine 3.

Sonic Boom will begin airing as a CG series on Cartoon Network this Fall as well, just in time to tie in to these two new video game releases.

Eggplante remains committed to speeding you all news and updates related to Sonic the Hedgehog.