Indie developer, Frozenbyte has found quite a bit of success with the beloved Trine and its sequel. After the most recent release of Trine 2: Complete Story netted them more fans than ever, they’ve decided to give the same remastering treatment to the original offering as well.

Frozenbyte has also confirmed that Trine: Enchanted Edition will be made for download on Wii U and PlayStation 4 later this year. It will presumably retail for the same $14.99 price as the PC release on those platforms when it arrives, and will no doubt resemble the mechanics and feature sets of Trine 2/Trine 2: Complete Story on those platforms.

The original Trine was released for PlayStation 3 in 2009, but beyond that, it’s been mostly unavailable to console gamers. 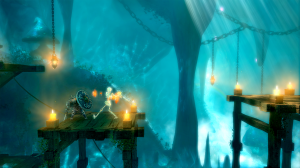 Trine is a puzzle-platformer where players take control of one of three heroes; A thief, a wizard and a knight. The player must cycle between the characters and use their unique specialties and abilities to bypass environments and hazards, with the three characters sharing a single roster of experience and levels.

While its sequel was even better-received, the original Trine was still met with highly positive reviews, and is considered to be an influential and especially ambitious indie game. It’s sure to only get better in Trine: Enchanted Edition.

Eggplante will continue to conjure your news and updates on Trine, and other superb indie games.