Sex Tape just doesn’t work. It’s one of those comedies that just seems to suffer from a failure to launch. You might say that it’s impotent, in fact, if you were wanting to be cute about it.

This is really unfortunate, since July was already kicked off with Tammy, another dismal misfire of a comedy that marked a low point in what’s already been a weak Summer all around for comedies. Sadly, Sex Tape is the most spectacularly failed offering yet in the genre for this Summer season. 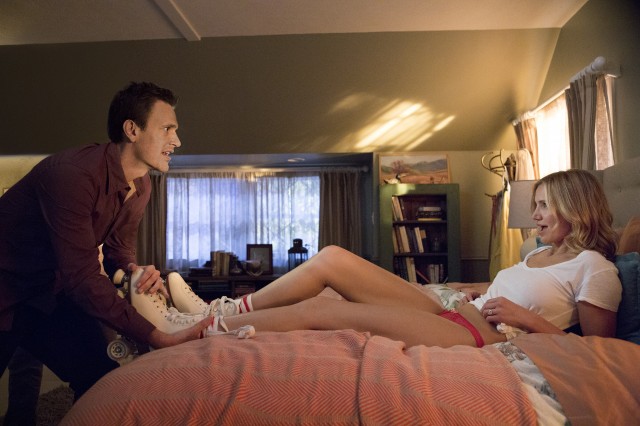 Among the worst of its offenses is that the movie is oddly afraid to truly embrace its potential for crude humour, and seems to be under the delusion that it’s some sort of adorable date movie. It seems to have no fundamental idea of exactly what kind of movie it wants to be.

Like I said, the movie just doesn’t work. If you’re looking for any level of laughs in a Summer comedy, you’re definitely better off skipping the disappointingly flaccid and unfunny Sex Tape for sure.

Another key reason as to why Sex Tape fails is because it takes two lead actors like Cameron Diaz and Jason Segel, two very talented actors, whom director, Jake Kasdan is reuniting after already pairing them up in 2011’s Bad Teacher, and then doesn’t really do anything with them. The most noteworthy thing it does is give you a couple of shots of Cameron Diaz’s bare bottom, and show her in a see-through top at one point. Hey, if you ever wanted to see it, here it is.

Really though, Jay and Annie are two stereotypical married spouses that have been done to death in comedies of all varieties. Worse still is that they don’t seem to have any kind of definable personality beyond being a husband and a wife. You sort of get the impression that Annie is a down-to-earth, career-driven woman, and you sort of get the impression that Jay is a daydreaming doofus, but none of this ever gels into real personalities or character arcs. How did the script forget to give its leads actual character arcs?!

With no traits to latch on to and no arcs to invest in, audiences will immediately feel entirely too disconnected from Jay and Annie as people, and as victims of Jay’s rather contrived mass-sharing of their titular sex tape. The movie fails to establish stakes, and this in turn makes the quest to reclaim the iPad’s with the sex tape just feel boring and tedious, simply being a patchwork of weak gags that almost consistently fail.

Sex Tape does feature a cast of supporting characters, though they leave just as little an impression. Ellie Kemper and Rob Corddry portray another married couple that are friends with Annie and Jay, but Kemper and Corddry are clearly struggling to add personality where none exists in the script. Corddry sort of succeeds at giving his husband character a mite of dunderheaded charm, but ultimately, he doesn’t fare much better than Segel.

One of the biggest fumbled character arcs however is that of Annie’s new boss, Hank, played by Rob Lowe, in the mother of all ironic casting, given that Lowe had his own sex tape scandal in the late 80’s. Hank is a weirdo that smokes cocaine and has a bunch of odd paintings around his house, and that’s literally his entire character arc. He’s odd. Again, this doesn’t translate to actual jokes, just awkward, failed attempts at jokes that don’t work.

The only time that Sex Tape begins to resemble having an actual memorable character is when Jack Black has a cameo part late in the movie that I can’t spoil. At the very least, Black is given some material to munch on, and actually manages a decent ratio of laughs while he’s on screen. This is why it’s frustrating that his part is little more than a cameo. 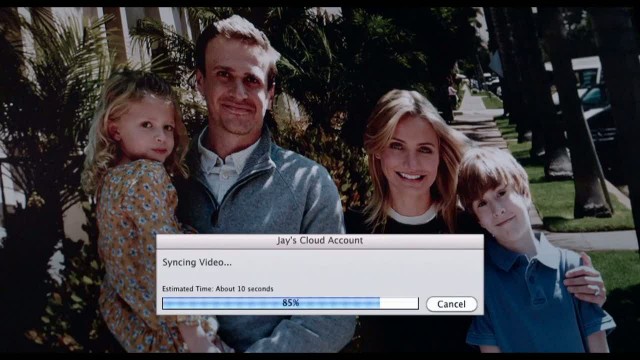 I couldn’t tell you thing one about any of Sex Tape’s characters as human beings, and that’s a real problem in a comedy that really wants audiences, especially married couples, to relate to it. Nothing is given any real depth or heart, and no one feels like a real person. This immediately makes Sex Tape fail as the date movie that it’s strangely desiring to be.

It’s really a shame, because the cast assembled here is quite good. The movie just squanders them wholly and spectacularly.

Sex Tape doesn’t get off to a good start with its story thanks to how contrived its key conflict is, and it only goes downhill from there. As if that weren’t enough, the trailers are absolutely littered with scenes and jokes that aren’t present in the rather lean 94-minute final product. It’s a dead giveaway that Sex Tape was hacked apart in the editing room in a desperate effort to salvage the piece.

Here’s the gist: Jay and Annie want to jumpstart their sex life as a boring, exhausted married couple, so they decide to make a sex tape. Problem is, instead of erasing the tape, Jay leaves it be, and the iCloud manages to place it on a series of iPad’s that Jay gave out as gifts after using them as a means to do his job making music. Why doesn’t Jay just use the same iPad? Why does he need to continually buy new iPad’s? Why does he give the old iPad’s away as gifts? If he can afford all of this, why do Annie and Jay bitch and moan about money at various points in the script? These are all elementary questions that the script does a pretty poor job of explaining, when it even bothers to try and explain them anyway. 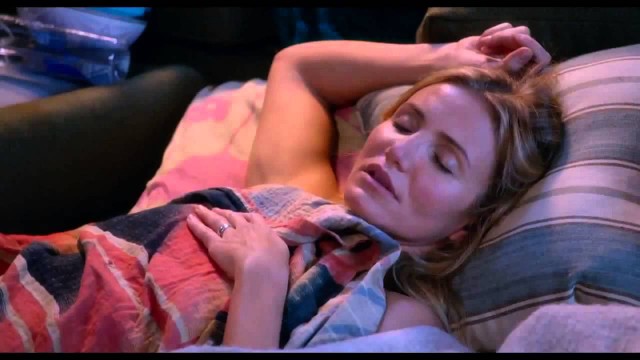 Oh, and if you noticed that I specifically noted the iCloud, that’s a whole other can of worms here. Despite this movie being handled by Sony, who have their own Xperia division of mobile devices, Apple seems to have paid through the nose for a ton of product placement in Sex Tape. Why? I haven’t the foggiest. Apple’s iPhone and iPad devices are blatantly showcased throughout the movie, even having lines thrown into the script about how convenient and durable they are. Wow. Subtle.

It seems that at some point during production, someone noticed the blatant plot hole of the iCloud not authorizing nearly that many devices, and really not working the way that the script claims it does as well. The movie tries to get around this by claiming that Jay used a third-party app that somehow circumvents the authorization limitations of the iCloud, but again, why would Jay need something like this when he can just use one iPad and one computer?!

This all adds up to an extremely laboured way for Sex Tape to get its plot off the ground, and if it needs to reach to this degree, something is very wrong. One character even points out directly that Jay could have remote wiped the sex tape, and given that Jay is supposed to be tech-savvy enough to use a modding app, why does he not know this already?! Don’t you love when bad scripts point out their own plot holes?

As you’re no doubt surmising already, Sex Tape’s entire plot is a total mess of contrivances and forced comedic setups with weak and awkward payoffs. Some of the random craziness could have been funny if the movie was content to be a raunchy gagfest, akin to Neighbors from earlier in the Summer, but it makes the fatal mistake of wanting to ground itself in reality.

At that point, even audiences who don’t mind suspending their disbelief normally will just find that Sex Tape’s problematic plotline raises far too many questions, and that’s before the irritating Apple product placement throughout the whole thing!

Director, Jake Kasdan has mainly done work in television, having contributed to shows like Ben and Kate and New Girl most recently, with Walk Hard: The Dewey Cox Story and Bad Teacher likely being the biggest film credits to his name, both two largely failed comedies themselves.

Kasdan has already directed Cameron Diaz and Jason Segel together in Bad Teacher, and goes particularly far back with Segel, whom he directed in a few episodes of Freaks and Geeks, before Segel became a well-known comedy actor. You’d think by now that Kasdan would be able to get better mileage out of his cast, but he still seems to have trouble translating his directing talents to film. 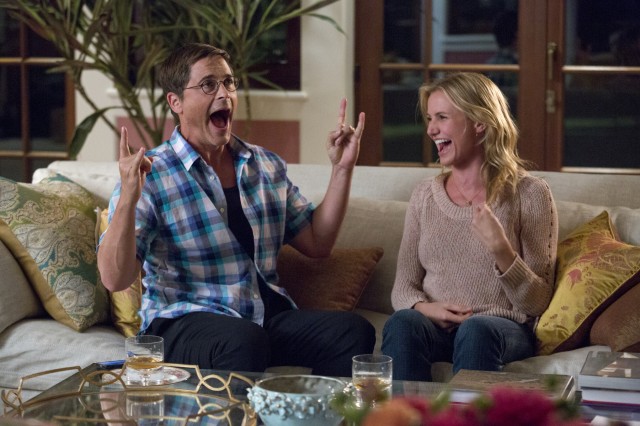 Sex Tape, like I said, suffers from feeling flaccid, and Kasdan’s background in television could be partially to blame here. Bad Teacher had the same issue with being unable to fully commit to its premise and tone. It’s because Kasdan just seems to be innately better suited to directing television, since he seems to struggle with the increased scope and freedom awarded in making movies.

This leads to Sex Tape being directed as if it were a network-approved sitcom episode stretched to an hour-and-a-half length, making its jokes too often feel neutered and half-hearted, with the actors clearly feeling stifled in the process. It makes the movie feel far too clean, which is yet another contributor to the sad reality that Sex Tape just isn’t funny.

Sex Tape just feels misconceived from the ground up. The premise is faulty, the plotline is laboured, the directing is flaccid, and the actors just have nothing to work with. It’s a textbook definition of a failed comedy that’s just dead-on-arrival.

There are a few saving graces here and there at the very least. Cameron Diaz and Jason Segel still have decent chemistry, just like they did when they were equally squandered in Bad Teacher. Likewise, Jack Black at least has an amusing part, even if it is a part that’s entirely too small. 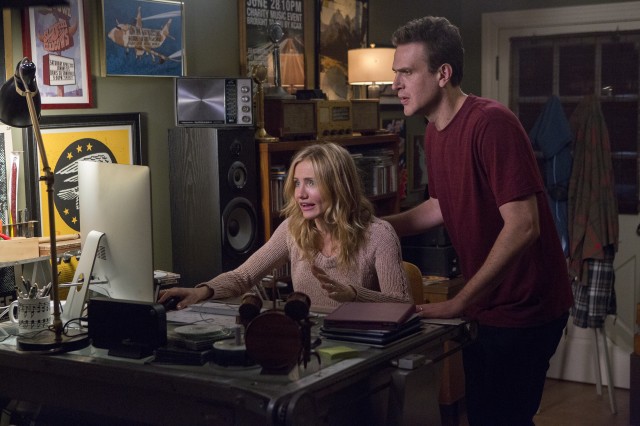 Barring the rather lousy Tammy, you’d be better off watching literally anything else for your Summer comedy fix. Neighbors, A Million Ways to Die in the West and 22 Jump Street may not be anything exemplary for the comedy genre, but at least they’re funny, watchable and have at least some level of inspiration behind them.

None of that is true of Sex Tape though. You’d be more likely to get better laughs from watching an actual sex tape by people you know.

Sex Tape Review
Nothing about Sex Tape works. It's an unfunny, awkward and laboured mess of a comedy that just feels misconceived from its very foundation.
CHARACTERS35%
PLOT30%
DIRECTION30%
THE GOOD STUFF
THE NOT-SO-GOOD STUFF
2014-07-28
33%Overall Score
Reader Rating: (0 Votes)
0%