It hasn’t quite gone free-to-play, but it’s a start. Square Enix has just announced that their latest MMORPG offering, Final Fantasy XIV Online: A Realm Reborn will now be offering a free trial on PC. Unfortunately, the PlayStation 3 and PlayStation 4 versions of the game don’t seem to be receiving the same benefit. 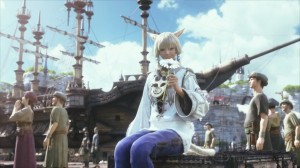 The trial for the PC version is offered on Square Enix’s official website, and allows you to play the game absolutely free for fourteen days. Would-be players must create a trial account, download the free trial software, and will be barred from some activities available to owners of the full version of Final Fantasy XIV Online: A Realm Reborn, as well as unable to progress past level 20. Hopefully the chance to start free will entice more people to join the world of Eorzea however.

Keep adventuring back to Eggplante for all news and updates related to the Final Fantasy series.