Microsoft has made the announcement that the Xbox One’s free-to-play fighter revival, Killer Instinct will be receiving a retail package.

Killer Instinct: Combo Breaker Pack will release at retail stores on September 23rd of this year, for $19.99 USD. It will include all eight fighters from ‘Season One’ of the game’s roster, specifically: Jago, Sabrewulf, Glacius, Orchid, Chief Thunder, Sadira, Spinal, and Fulgore. 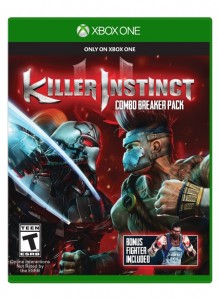 Killer Instinct can be downloaded as a base package for free on the Xbox One Games Store, though you will only receive one arena, and can only play as one fighter to start. You have to either purchase each other fighter and arena individually, or purchase variety packs that give you greater selections of content to expand the game. While this may seem like a nuisance, it allows Microsoft and co-developer, Rare to circumvent normal DLC practices, and provide a larger degree of aftermarket support for what has consistently been a highly anticipated fan-favourite fighter revival.

We reviewed Killer Instinct last year during the Xbox One launch season, and were quite pleased with it, declaring it a very well-designed fighter that equally appeals to series veterans and newcomers, and a rare example of a free-to-play package done right.

Keep combo’ing back to Eggplante for all of your news and updates on Killer Instinct.