A very different kind of vigilante will find themselves in Starling City for Arrow’s upcoming third season. Medium’s David Cubitt has just been cast in the series as Mark Shaw, best known as one of the characters going by the alias, ‘Manhunter’ in the DC Universe. 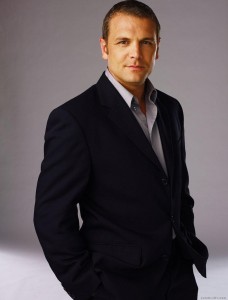 Shaw’s Manhunter is an anti-hero that is dissatisfied with the justice system’s handling of criminals, believing that evildoers get off too easy when sentenced in a court of law. As a result, he joins the secret order of Manhunters, and exacts his own definition of justice.

Arrow’s Manhunter is said to be an operative of A.R.G.U.S. that has a run-in with Oliver Queen’s buddy, Diggle. This could also tie in to the character’s comic book history as a member of Amanda Waller’s Suicide Squad, a task force of anti-heroes and villains that was featured during Arrow’s previous second season. Does this mean that we’ll be seeing another Suicide Squad at some point in the show’s future?

Regardless, Cubitt’s Mark Shaw will make his debut in the new season’s third episode, though neither DC nor The CW have provided any additional details.

The moniker of ‘Manhunter’ is very frequently used throughout DC Comics canon. Outside of the group of human men that are part of the vigilante order of Manhunters, a precursor to the intergalactic police force, The Green Lantern Corps. consisted of an android task force called the Manhunters. Likewise, one of the most top-tier alien DC Comics superheroes goes by the moniker, ‘Martian Manhunter’.

Manhunter joins some other DC heroes in the upcoming third season of Arrow, including Katana, played by Devon Aoki, Wildcat, played by J.R. Ramirez, and The Atom, played by Brandon Routh. Caity Lotz will also be returning as Sara Lance/Black Canary in a guest role at certain points throughout the third season.

Eggplante will continue to target your news and updates on Arrow and the DC Television Universe at large.