Get ready to return to the world of the Midnight Channel for another brawl! Atlus has just announced that Persona 4 Arena Ultimax will release in North America on September 30th.

A sequel to the well-received Persona 4 Arena, which released in 2012 for Xbox 360 and PlayStation 3, Persona 4 Arena Ultimax has been available to play in Japanese arcades since last year, and will come to the Xbox 360 and PlayStation 3 in Japan at the end of this month. It is a 2D fighter that serves as both a sequel story and spin-off to Atlus’s highly celebrated RPG/social sim hybrid, Persona 4, just like its predecessor.

Persona 4 Arena Ultimax joins Persona Q: Shadow of the Labyrinth as one of two Persona releases this year for Atlus, who was recently 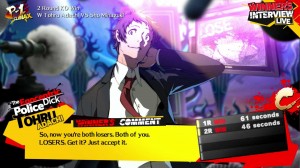 acquired by Sega, following the bankruptcy of their parent company, Index Corporation. Persona Q: Shadow of the Labyrinth comes exclusively to Nintendo 3DS on November 25th, and will be a first-person dungeon crawler that combines the casts of Persona 3 and Persona 4 in an all-new story.

If you’re interested in Persona 4 Arena Ultimax, bear in mind that two DLC fighters, Adachi and Marie, are being offered as free DLC for the game, but only for the first week! After that, you will have to pay for them.

Look for Persona 4 Arena Ultimax on Xbox 360 and PlayStation 3 at the end of this September. Remember as well that Eggplante will divine all of your news and updates on the Persona series as a whole.