Conventional wisdom appears to dictate that dedicated gaming devices are obsolete thanks to the rise of various catch-all mobile devices like smartphones and tablets. Even Sony appeared to believe this paradigm, developing the PlayStation Mobile initiative to bring PlayStation-certified games to Android devices, despite having their own dedicated gaming handheld with the PlayStation Vita. 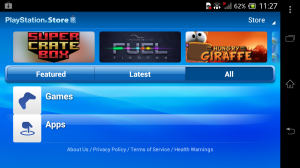 Interestingly, Nintendo, Sony’s sole competitor in the dedicated gaming handheld market at this point, has often been criticized by numerous parties in the media and community for their refusal to develop their brands and other dedicated games for smartphones and tablets. Nintendo CEO, Satoru Iwata has adamantly refused to outsource Nintendo’s brands to mobile, citing that it would undermine Nintendo’s own portable hardware’s sales, revenue and consumer value (the 3DS, in this case), and would negatively impact both Nintendo’s overall revenue and overall brand value in the long-term, with only short-term profits to be had.

Sony has not given an official reason for appearing to abandon mobile game development efforts, but it’s possible that they may have realized that helping to make games on independent mobile devices was negatively affecting PlayStation Vita sales and brand value, with the device continuing to struggle at retail, despite a dedicated, modestly-sized user base that has received the handheld well. Sony recently made a statement about wanting to refocus their efforts more on boosting the PlayStation Vita ecosystem, despite also doubting future triple-A offerings on the platform, which would appear to strengthen this suspicion. Nintendo’s stance on mobile game development while fostering a dedicated handheld platform may have just been proven right.

Of course, the shedding of PlayStation Mobile on independent devices may also simply be another way for Sony to try and save money, considering that the venture really didn’t seem to be panning out that well. Sony has been bleeding funds for years now, though they’re starting to climb out of the red, after some extensive company restructuring. Even during the thick of their money woes however, the PlayStation division remained profitable for the company, which is perhaps why former PlayStation boss, Kaz Hirai ended up being promoted to Sony’s overall CEO in the wake of the restructuring efforts.

Will you miss PlayStation Mobile on Android? Are you happy that Sony is refocusing their resources on the PlayStation Vita instead? Do you care either way? As usual, your comments are welcome below.

Eggplante will continue to deliver your news and updates on all things PlayStation.