One of the newest additions to the DC Comics Universe, Komodo is about to make his way to DC and The CW’s highly successful television series, Arrow.

TRON Legacy’s Matt Ward has been cast in the role of Simon LaCroix, the man who operates as DC Universe mercenary, Komodo. In the DC printed pages, Komodo is a former protege of Oliver Queen’s father, Robert Queen, and was even responsible for Queen Sr.’s death in the rebooted New 52 continuity that comprises DC’s modern comics. Not only is he a mercenary, but also a highly skilled archer, with skills that rival Oliver’s own as superhero, Green Arrow. 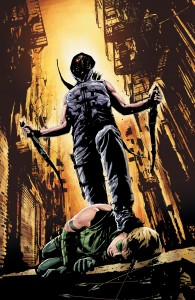 On Arrow, Komodo will make his debut during the upcoming third season’s second episode. The showrunners have confirmed that he’ll still be a mercenary, wreaking havoc in Starling City, and aren’t shy about admitting that he’s a villain-of-the-week antagonist. With that said however, even though we’ll know where Komodo stands by the end of the episode, his story arc will have ties into a larger arc that comprises the remainder of the season, similar to the arc of Deathstroke, the main villain of Arrow’s previous second season.

Interestingly, Komodo has only been introduced into DC canon in 2013, making him one of the most recent new DC characters to appear on Arrow. With Arrow already largely drawing from the modern New 52 DC Comics Universe however, rather than classic Green Arrow canon, perhaps it’s unsurprising that the show is wanting to incorporate more post-New 52 characters, which it will also be doing with the introduction of a second New 52-debuting Count Vertigo right from the new season’s premiere.