David Yates has helmed every Harry Potter movie since 2007’s Harry Potter and the Order of the Phoenix. Those who have grown accustomed to his style can look forward to it again, now that Yates has been officially signed to direct the first installment of Fantastic Beasts and Where to Find Them, a spin-off to the Harry Potter movies that takes place seven decades before Harry’s octology of movies, based on an official appendices textbook written by J.K. Rowling. 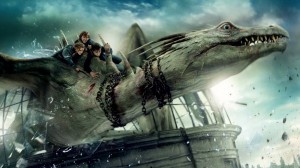 It’s unknown whether Yates will also return to direct the two planned follow-ups, but his continued dedication to the wizarding world will certainly net him a busy year at Warner Bros.! Yates is also helming a big screen reboot of Tarzan for the studio that year, which will release a few months beforehand, on July 1st, 2016. It will star Alexander Skarsgard, Margot Robbie, Samuel L. Jackson, Christoph Waltz, and Djimon Hounsou.

Fantastic Beasts and Where to Find Them will center on the wild expeditions of Newt Scamander, the fictional author of the real-life textbook, in turn based on a textbook used by wizarding students at Hogwarts. Beyond that, no details have yet come to life regarding greater plot specifics of the first movie that Yates is directing, nor where it might go in its two follow-ups.

Catch Fantastic Beasts and Where to Find Them in theatres on November 18th, 2016.

Eggplante will continue to conjure your news and updates on Fantastic Beasts and Where to Find Them, along with any other potential developments in the Harry Potter universe.