UPDATE: It’s been clarified by ABC that The Absorbing Man will be featured in the Season Two premiere of Agents of S.H.I.E.L.D., right on Tuesday, September 23rd. Details on the character’s arc are still unknown however.

A dangerous Marvel antagonist will make his debut in the Marvel Cinematic Universe, at least on the small screen, during the upcoming second season of Agents of S.H.I.E.L.D.!

Teen Wolf’s Brian Patrick Wade has been cast as Carl “Crusher” Creel, who, in the Marvel Comics Universe, is a boxer and criminal that gains the ability to absorb any substance he touches thanks to Loki lacing a drink with mysterious Asgardian ingredients. Adopting the mantle, ‘The Absorbing Man’, Creel is primarily an enemy of The Hulk, and has made numerous appearances in Marvel media, between video games, cartoons and even trading cards.

Along with the announcement, Marvel and ABC have released an official image of Wade as Creel, which you can check out below:

The Absorbing Man is the first high-profile villain to be confirmed for the new season of Agents of S.H.I.E.L.D., and has yet to be properly realized in live-action, mostly. Ang Lee’s original 2003 Hulk movie’s initial script had Absorbing Man as the villain, before it was re-written to have Bruce Banner’s father, David Banner as the super-powered threat instead. The only remnant of Absorbing Man in the final movie is the fact that Banner Sr. gets his substance absorption powers, and uses them against The Hulk in the climax. 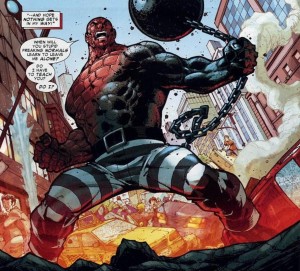 It’s unknown which episode Absorbing Man will debut on at this time, but he will certainly prove to be a deadly enemy for the show’s title characters, as his powers make him pretty well indestructible! It’s doubtful, but maybe if we’re very lucky, we’ll get a guest appearance by Mark Ruffalo’s Bruce Banner, to cement Absorbing Man in his proper role as a foe to Banner’s big, green alter-ego.

Keep spying Eggplante for your news on Agents of S.H.I.E.L.D., and the Marvel Cinematic Universe at large.