One of the DC Comics personalities set to debut during the upcoming third season of Arrow is now going to be sporting a different face in the end. Sin City’s Devon Aoki, who was originally signed for the role of the spiritual swordswoman, Tatsu Yamashiro, a.k.a. DC heroine, Katana, has now had to bow out of the show due to scheduling conflicts.

Fortunately, DC and The CW have already found a replacement in another comic book movie veteran, Rila Fukushima. A former full-time model, Fukushima made her acting debut as sidekick swordfighter, Yukio in last year’s The Wolverine. Needless to say, the transition to Katana shouldn’t be a tough one in that case, even if it means a jump from Marvel to DC. 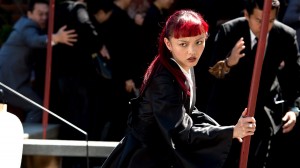 Katana will be a mentor figure to Oliver Queen during the recurring flashback sequences that will remain a part of the show’s upcoming third season. Now finding his way off of the island, Lian Yu, Oliver’s past memories will lead him to Hong Kong, where he will encounter Katana, along with her husband, Maseo Yamashiro, who is still set to be portrayed by Karl Yune.

Keep shooting to Eggplante for all of your news and updates on Arrow, and the DC Television Universe at large.