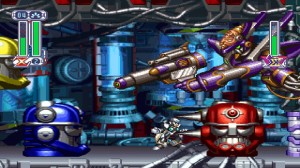 Now, PlayStation gamers are set to get some retro Mega Man love, with Mega Man X4 and Mega Man X5 set to be re-released on the PlayStation Store’s PS One Classics line next month. Strangely, Mega Man X6, the remaining game in the subseries made for the original PlayStation, doesn’t appear to be set for a PlayStation Store release at this time. Regardless, while pricing is uncertain for now, Capcom has confirmed that both games will be playable on PlayStation Vita, as well as the expected PlayStation 3 and PlayStation Portable.

Mega Man X4 will come to the PlayStation Store on Tuesday, September 2nd, with Mega Man X5 arriving on Sony’s digital storefront the following week, on Tuesday, September 9th. Despite seeing the most acclaim and sales on PlayStation, both games also released for PC, with Mega Man X4 receiving a port for the Sega Saturn as well. Both games can also be played on the Mega Man X Collection for GameCube and PlayStation 2, along with their three predecessors and first successor.

Both Mega Man X4 and Mega Man X5 allow you to control both the titular Mega Man X, as well as his battle partner, Zero, who both present a unique style of gameplay. Mega Man X4 details the Maverick Hunters having to battle against the rogue reploid nation, Repliforce, while Mega Man X5 gives them a limited time to save the planet from a falling space colony that is set to devastate the planet for both humans and reploids alike.

Despite fan frustration at Capcom refusing to release all-new Mega Man games since Mega Man 10 launched for the PlayStation Store, WiiWare and Xbox Live Arcade in 2010, interest in the character appears to be rising at the company. Mega Man is set to be a playable character in Nintendo’s upcoming crossover brawlers, Super Smash Bros. for Nintendo 3DS and Super Smash Bros. for Wii U, and the retro re-releases appear to be trying to boost demand for the series lately.

This could potentially be in response to series creator, Keiji Inafune’s new independent game studio, Comcept crafting two highly hyped spiritual successors to Mega Man, Azure Striker Gunvolt, just now releasing on the 3DS eShop, and Mighty No. 9, set to release across all current game platforms next April, and planning an animated series to boot.

Then again, these re-releases of established and popular sellers could also be a way for Capcom to make some easy money, as they appear to be suffering from financial issues lately. They’ve announced that they are open to a buyout by another company, and have filed a dubious lawsuit against Tecmo Koei for alleged infringements on game development patents that Capcom supposedly filed, which Tecmo Koei apparently violated in their Warriors series.

Regardless, here’s hoping that the situation sorts itself out, and Capcom remembers that Mega Man is their highest-selling and most profitable franchise.

Keep dashing to Eggplante for all news and updates on the Mega Man franchise.