After Volition Inc. released a cryptic teaser image earlier today, on top of teasing a high-profile new reveal at this year’s Penny Arcade Expo, they’ve just confirmed what they’re cooking up. It may not be a prospective Saints Row V, but it’s still something that fans of Third Street’s meanest gang should be quite happy about. 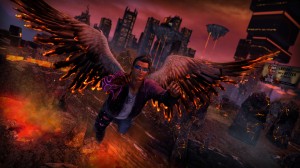 initially released last year for PC, Xbox 360 and PlayStation 3, is getting a third expansion, this time a standalone offering. This means that a copy of Saints Row IV is not required to play this new offering, particularly since it’s not only releasing for the game’s three established platforms, but also for PlayStation 4 and Xbox One!

The expansion is titled Saints Row: Gat Out of Hell, and as the title suggests, it stars fan favourite Saints bruiser, Johnny Gat. Players will be able to control both Gat and fellow Saint, Kinzie Kensington, as a mishap with a ouija board leads to the The Boss/The President/God-Emperor of the Universe (read: player character from the fo 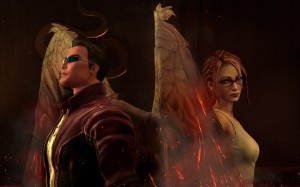 rmer games) getting abducted by Satan to marry his daughter. Thus, Gat and Kinzie must enter Hell itself to take back their leader.

A trailer for the expansion shows off the story, which continues to follow the events of Saints Row IV, as well as various gameplay snippets. Both Gat and Kinzie are shown in their playable incarnations, wielding demonic weaponry and vehicles, and fighting the demon hordes of Hell as Gat enacts his plan of shooting the devil in the face. Needless to say, the series’ reliable brand of surreal, hilarious insanity appears to be alive and well in its latest entry.

On top of this expansion’s announcement, Volition also confirmed that Saints Row IV will be re-released for next-gen consoles, complete with all of the game’s DLC bundled in, a combined package that made it to PC, Xbox 360 and PlayStation 3 this past July. On PlayStation 4 and Xbox One, the package will be called Saints Row IV: Re-Elected, and it will slightly upgrade the visuals, on top of adding Share Button/GameDVR functionality. While there will be an optional bundle that includes Saints Row: Gat Out of Hell, the standard version of the game will not be packaged with the new expansion, which players must download separately. 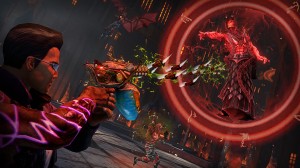 There’s no word on pricing for either of these announcements at this point, but both the expansion and re-release will launch on January 27th, 2015 for North America, and January 30th, 2015 for European territories. Saints Row IV: Re-Elected is now available for pre-order as well.

Keep pillaging Eggplante for all of your news and updates on Saints Row.