On the heels of Sony detailing their lineup of free PlayStation Plus games for September 2014, Microsoft has now outlined the free game selections for Xbox Live Gold members on Xbox One and Xbox 360 for next month.

The new Games with Gold o 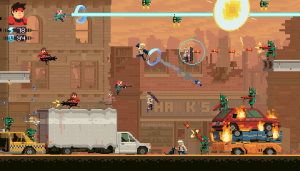 fferings go live immediately on September 1st, whereupon most of August’s free Games with Gold will cease to be free offerings for Gold members. Thus, if you have yet to redeem Strike Suit Zero: Director’s Cut on Xbox One, or Dishonored on Xbox 360, you have until next Monday to add them to your libraries. As before, Xbox 360 owners can keep their Games with Gold downloads forever, even if they don’t renew their Xbox Live Gold membership upon expiry, though Xbox One owners can only access their Games with Gold downloads as long as they maintain an Xbox Live Gold subscription.

While Strike Suit Zero: Director’s Cut is disappearing soon, Crimson Dragon, the other free game currently offered on Xbox One for August, will remain free for this September, giving you an extra month to redeem it if you’re interested. This also means that Xbox One only gets one new Games with Gold freebie this month unfortunately, though Xbox 360 will still be receiving two, one for each half of the month, as per usual.

Throughout September 2014, Xbox One owners with Xbox Live Gold memberships can download Super TIME Force free of charge, a side-scrolling shooter indie game developed by Capybara Games. The game is also available on Xbox 360, and released for PC just this week, with every version received well. Players take control of a squad called the Super TIME Force, who must travel back in time to save the dinosaurs from extinction. They are given thirty lives to survive with in a slew of bullet hell worlds.

On Xbox 360, from September 1st to September 15th, Xbox Live Gold members can redeem an Xbox Live Arcade title, Monaco: What’s Yours is Mine. The heist-style stealth game is also available for PC, Mac and Linux, with four separate campaigns on offer that flesh out the stories of a group of thieves. The game was very well-received on all platforms, and was considered to be one of the most original and memorable digital download games of last year.

Xbox 360 owners with Xbox Live Gold subscriptions will then get highly acclaimed flagship first-person shooter prequel, Halo: Reach from September 16th to September 30th. First coming to retail in September of 2010, the Xbox 360-exclusive blockbuster marked the final Halo game developed by Bungie, before the series was passed on to 343 Industries. The game chronicles the beginning of the Halo games’ timeline, with the alien Covenant factions attacking and seizing the human colony of Reach, thus sparking the war between human and Covenant. Players control Noble-6, a character that also represents their avatar in a robust online multiplayer suite, as they live their final days on the doomed colony right at the start of the war.

This is arguably a stronger selection of games compared to last month, so if you own either or both of Microsoft’s current consoles, don’t miss out on these latest Games with Gold offerings!

Eggplante will bring you any news and updates on various Xbox incentives.