Sony has revealed which free games PlayStation Plus members can redeem throughout the month of September. The new games will go live on Tuesday, September 2nd, whereupon August’s six selections will disappear. Thus, if you have yet to redeem Road Not Taken, Fez, Crysis 3, Proteus, Dragon’s Crown or Metrico, be sure to do so before that day, as they will cease to be free offerings afterward.

As usual, six free games will be offered for the month, with two on each of Sony’s current platforms. The games 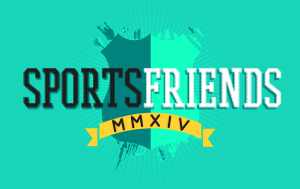 will be available to freely download and play, though if you redeemed them as freebies, you must maintain a PlayStation Plus membership to continue to be allowed access to them.

As with last month, two of the games on offer are entirely new as well, and will be free for the month for PlayStation Plus members from their initial release date! One however is a port of a game that’s been available on multiple other platforms for a while.

Velocity 2X will release for the first time on September 2nd, and is the sequel to one of the PlayStation Store’s top indie offerings, Velocity Ultra! The game is a fast-paced shoot ’em up with puzzle-platformer elements that has players both out-shooting and out-smarting an alien menace. It’s also cross-buy, with downloaders also able to score the PlayStation Vita version of the game for free when they redeem or purchase the game for PlayStation 4, and vice-versa! 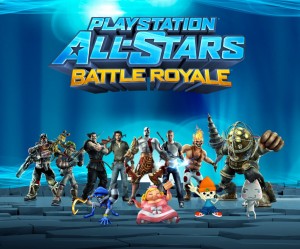 Sportsfriends meanwhile is a multiplayer-focused collection of exotic, sports-like challenges that can be enjoyed with either the regular Dual Shock 4 controller, or a PlayStation Move motion controller. The game is cross-buy as well, netting you the PlayStation 3 version for free when you redeem or purchase the PlayStation 4 version, and vice-versa. Sportsfriends has also received reasonably positive feedback since its release this past May.

For those still rocking the last-gen PlayStation 3, you can redeem PlayStation All-Stars Battle Royale and Hoard on Sony’s legacy console.

PlayStation All-Stars Battle Royale is a Super Smash Bros.-esque mascot crossover fighter, and the lone retail game offering for September’s PlayStation Plus freebies, incorporating both first-party and third-party game characters across the PlayStation family of consoles. It originally released in 2012, and while it’s considered inferior to Nintendo’s Super Smash Bros. games, it’s still an enjoyable mascot brawler that is great fun

with friends. Not only that, but the game is cross-buy as well, so when you redeem or buy the PlayStation 3 edition, you score the PlayStation Vita version of the game for free, and vice-versa!

Hoard on the other hand, is an action/strategy game that has players controlling a dragon. As the title suggests, players must amass and protect treasure, as well as raze villages and defend their loot from the valiant knights and crafty thieves that would dare to challenge them. The game received decent feedback during its initial release on PlayStation 3, and later saw releases on the PlayStation Portable and PC.

Finally, if you own the handheld PlayStation Vita, you get the chance to redeem two more free games as a PlayStation Plus member this September; Joe Danger and TxK. 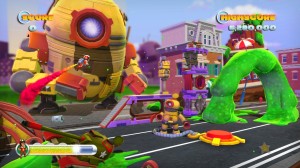 Joe Danger has been available on PlayStation 3 since its debut launch on the console in 2010, and has since come to Xbox 360, iOS and PC as well. The game releases for PlayStation Vita for the first time on September 2nd, though it won’t support cross-buy with its former PlayStation 3 sibling. Regardless, the PlayStation Vita version is fully intact and fully loaded for Sony’s handheld, featuring revamped touch control, along with the same vibrant, colourful graphics from the PlayStation 3 edition. Once again, players must challenge themselves to race through obstacle courses and perform ridiculous stunts for their loyal audience of fans! Given that Joe Danger has received immense acclaim in its prior incarnations, the new PlayStation Vita release is bound to be just as fantastic as well!

Finally, TxK is a PlayStation Vita-exclusive arcade shoot ’em up that blends a killer soundtrack with psychadelic visuals, as you aim to blast away legions of foes! The game was spotlighted during Sony’s first PLAY 2014 selection at the start of this year, and was received very well.

If you’re interested in any or all of these games, be sure to check them out before October. After all, they’re free if you’ve shelled out for a PlayStation Plus subscription!

Eggplante remains committed to delivering all of your news and updates on PlayStation Plus, and other PlayStation-related incentives.