Square Enix’s Dragon Quest series of RPG’s may merely be a cult series in North America and Europe, but in Japan, it’s a massive cultural phenomenon, and one of the best-selling game franchises in the entire region! 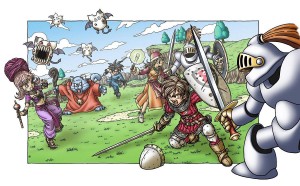 Thus, Sony closed out their pre-TGS PlayStation press briefing today with an announcement that should get Japanese gamers very excited! Omega Force, the frequent developers of Tecmo Koei’s Dynasty Warriors series, has been announced to be developing a Dragon Quest spin-off, Dragon Quest Heroes, which is set to release in Japan next year for PlayStation 4 and PlayStation 3!

Interestingly, Dragon Quest Heroes has already been used as a spin-off title in the West, specifically for Dragon Quest Heroes: Rocket Slime on the DS. This was a localization of Japan’s second entry in the Dragon Quest spin-off series, Slime MoriMori, centering on the series’ highly beloved Slime monsters.

A teaser was released, showing some new Dragon Quest-flavoured knights and wizards taking on armies of familiar Dragon Quest monsters, including Slimes, Drackies, King Slimes, Axe Knights, and more! It’s not explicitly confirmed, but it appears that the game emulates the style of the Dynasty Warriors games, but with a Dragon Quest theme.

Dragon Quest Heroes hasn’t yet been confirmed for a Western release, but hopefully it makes it here. The series’ previous mainline entry, Dragon Quest X: Rise of the Five Tribes Online, an MMORPG, was never released outside of Japan, despite it now being available on five platforms there. Given that Dynasty Warriors is also popular in Western territories however, it’s unlikely that Square Enix would simply leave this spin-off in Japan in the long run.

Tecmo Koei is collaborating with Nintendo on another themed Dynasty Warriors spin-off, Hyrule Warriors, which releases on September 26th, exclusively for Wii U, and features characters from throughout the Legend of Zelda franchise. Might this signal a trend, with Tecmo Koei making deals to license the Dynasty Warriors formula to various popular Japanese franchises?

In any case, Eggplante will continue to adventure for your news and updates on the Dragon Quest series.