Another DC baddie will be headed to Starling City for the upcoming third season of Arrow, and this one should be well familiar to the two core DC heroes comprising The CW’s DC Television Universe at this point.

Digger Harkness, better known as Captain Boomerang, will debut in the seventh episode of Arrow’s upcoming season, and will re-appear in the eighth episode, set to be a crossover with the show’s soon-debuting spin-off series, The Flash. Spartacus actor, Nick Tarabay has signed for a multi-episode role as Captain Boomerang, making him the fourth Spartacus actor to take a role as a DC Comics personality on Arrow. He was preceded by Manu Bennett as major Season Two villain, Slade Wilson/Deathstroke, Cynthia Addai-Robinson as government honcho, Amanda Waller, and Katrina Law as master assassin, Nyssa Al Ghul.

Captain Boomerang, as his super-villain moniker suggests, is a foe that relies primarily on trick boomerangs, later gaining the ability to conjure boomerangs out of pure energy. On Arrow, the character will be a former A.R.G.U.S. operative (referencing his comic book history as a former member of Amanda Waller’s Suicide Squad), one who is highly skilled in martial arts and espionage, with a major vendetta against Amanda Waller’s organization. It’s also likely that he’ll be bringing a boomerang or two to proceedings.

Despite debuting on Arrow as an antagonist to Starling City’s Green Arrow, Captain Boomerang has primarily been an enemy of The Flash throughout most of DC Comics history, even being one of the most prolific members of The Rogues, the pantheon of Flash baddies that are already confirmed to be featured on the Scarlet Speedster’s upcoming new show. It’s possible that Tarabay’s Captain Boomerang could be fair game for either of The CW’s current shows, perhaps deciding he’d rather torment The Flash in the long-term than menace Green Arrow. 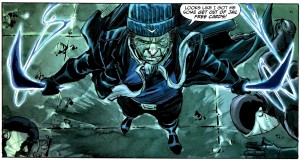 Keep shooting Eggplante for all of your news and updates on Arrow, The Flash and the DC Television Universe at large.