NOTE: Full spoilers for The Big Bang’s Theory’s eighth season premiere and seventh season finale are present in this review.

Well, that was a whole lot of nothing. After Sheldon making a big fuss about change and wanting to go on a personal journey to wherever the wind took him at the conclusion of Season Seven, The Big Bang Theory begins its eighth season with the status quo immediately restored for the most part. The show has liked to end seasons with core cast members going on big trips and begin the subsequent seasons with how the other characters are dealing with said character or characters’ absence, true, but come on, they aren’t even trying with Sheldon’s arc here.

This, “Absence makes the heart grow fonder” hook worked reasonably well when, say, Howard went to space. This change lasted for quite a few episodes, and the effects of the trip helped to define that season. Heck, even Leonard’s largely redundant trip on a sea voyage at the start of Season Seven had at least some impact while it lasted. With Sheldon’s supposed ‘crisis’ though, it’s become especially apparent that the writers are just going through the motions at this point. That’s not very assuring when the show has already received a three-season renewal through to 2017. 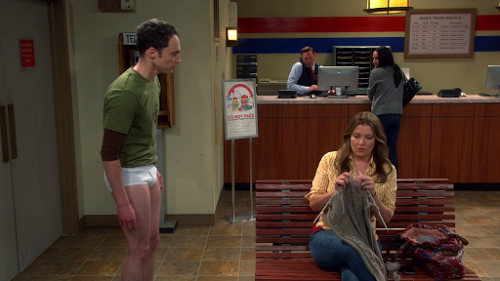 Anyhow, “The Locomotion Interruption” begins with Sheldon having been robbed of most of his earthly possessions that he took on his trip, including his pants, and having to call Leonard and Penny for help. On the note of Penny, Kaley Cuoco-Sweeting is sporting a radically shortened new hairdo, and it works in service to the increasing maturity of her character at this point, particularly considering that she’s trying to find another job, and that she and Leonard are getting married.

The subplot of Penny trying to get a job at Bernadette’s pharmaceutical company was a decent one, particularly given that it ends the way you would expect it to, but finds a decent way to surprise with some laughs when Penny bonds with her interviewer over a shared fear of Bernadette. The material for the girls was good in general in fact, as the tension carried by Amy over the fact that Sheldon called Leonard and Penny and not her wasn’t something that was just swept under the rug. No, that was left for a blatant and frustrating tease where Sheldon suddenly declares that he wants sex with Amy, but then goes back on it two minutes later, for a noticeably contrived reason.

Over on Howard and Raj’s side, Howard is continuing to struggle with the idea of Stuart potentially replacing him with his mother, either as a dutiful son or, worse, as a potential stepfather. It’s a bit amusing that the show is leaving the relationship between Stuart and Mrs. Wolowitz (or Debbie, if you want to go by the Season Seven finale’s revelation of Mrs. Wolowitz’s first name) a bit ambiguous, and this is something that’s bound to come up again later in the season.

Raj largely just stood by as support for Howard, who had some interesting development in the season premiere, thanks to the Stuart conflict. Bernadette was largely kept busy with Penny, but it’s cool to see that Howard is going through change as much as Leonard, Sheldon and Penny are. Even Raj has held down his beautiful girlfriend from the previous season, which was a bit surprising, given that there’s times in the show’s history where the writers have simply opted to sweep romances under the rug with no explanation, and a season interim would have been an easy way to do that. Props for not taking the low-hanging fruit, and thus allowing Raj to regress as a character. 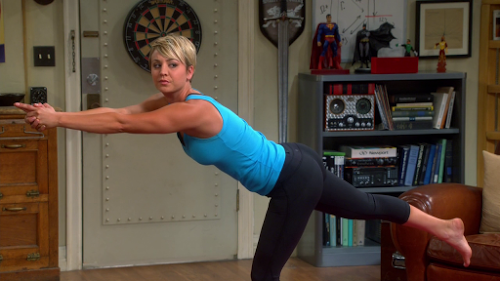 For all of its purporting to be about change however, the title of this episode pretty much says it all. The change with Sheldon was one big, giant fake-out on every account, which was very frustrating. Amy yet again forgives him in the end, even with some attempt made to make her remain angry at Sheldon’s actions for a little while, and despite the engagement of Leonard and Penny, and the change in characters like Stuart and Howard, the show is still trying its best to keep things the way they are.

This ultimately led to a pretty unexciting season premiere. It wasn’t an unfunny season premiere, mind you, but it was a pretty dull one. Nothing felt like it had any real weight behind it, beyond the material with Penny, and while the jokes were at least solid, their punch lines were still all too predictable.

As usual, I’m happy to see the gang again, but they can do better than this.

The Big Bang Theory 8.1: "The Locomotion Interruption" Review
The Big Bang Theory starts its eighth season on a weak note, with a lazy end to Sheldon's crisis, and Penny and Howard left to shoulder everything.
THE GOOD STUFF
THE NOT-SO-GOOD STUFF
2014-09-23
66%Overall Score
Reader Rating: (0 Votes)
0%