NOTE: Some minor spoilers for the first episode of Gotham are present in this review.

Gotham is arguably the most exciting and high-profile new show of the 2014/2015 season at this point. FOX and DC have given the series a huge push, with a brilliant and detailed ad campaign that spotlights the many personalities that existed in Gotham City, long before Batman ever took up the cape and cowl to fight for the city’s soul.

As the advertising suggested, Gotham is a very well-produced and ambitious show as well. Right from the opening moments, detailing the inevitable and tragic murders of Bruce Wayne’s parents, the show feels grand and epic. It’s emotionally charged, stylish, harrowing, and undeniably thrilling. Sure, the pilot is a little rough and scattered in some spots, but there’s no denying that Gotham is a bona fide badass new television series, one that has gotten off to a pretty strong start! 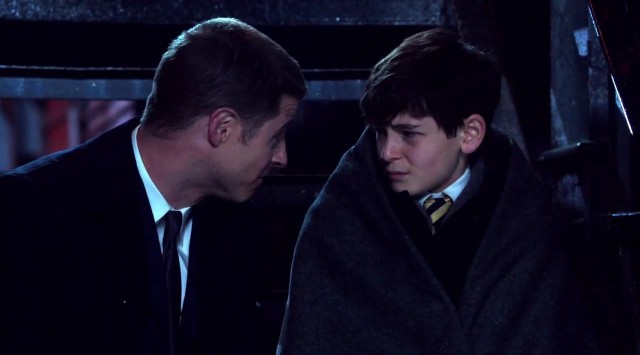 As the series begins, former war veteran, Jim Gordon, currently a young and idealistic rookie detective, has just joined the ranks of the Gotham City Police Department. He’s paired with the cynical and almost proudly corrupt, Harvey Bullock, who immediately sees Gordon as a man not quite in touch with the reality of Gotham City, where organized crime owns both the police and the mayor’s office, and the only way to stay alive is to follow the rules of powerful men who make their own law.

To start, Ben McKenzie, best known for his roles in Southland and The O.C., is quite well cast as the young Jim Gordon. He carries a sharp mix of intensity and hope, and while he currently feels rather under-developed compared to the more complex and grey Harvey Bullock, the character has plenty of exciting potential. He has a beautiful fiancee named Barbara (usually the name of Gordon’s daughter in DC Comics lore), he’s shown to be able to handle dangerous situations by non-lethally neutralizing a dangerous criminal holding a cop hostage in the first minutes, and he clearly isn’t scared of Gotham City’s underworld. 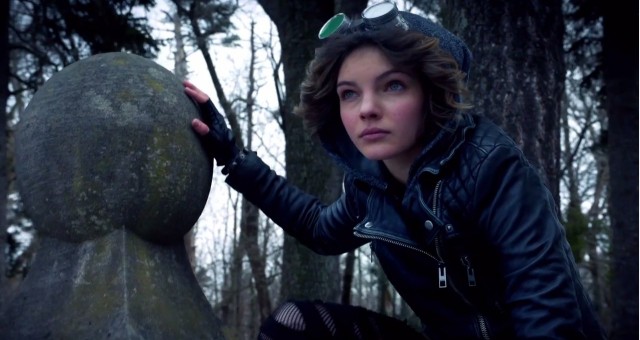 With that said, there’s still no denying that Gordon’s best moments are way ahead of him. He inevitably has to be shown the ropes by Bullock to start, but Gordon’s defining moment doesn’t truly come until he’s forced to execute a treacherous Oswald Cobblepot right at the end of the episode. Needless to say, he doesn’t go through with it, as Cobblepot must inevitably grow into one of Batman’s most dangerous foes someday, but seeing Gordon uphold his faith and morals, even when the city’s inherent corruption seemingly gives him no way to do so, is bound to be one of the biggest and best draws of Gotham.

This is something that is truly wonderful about this show, even from the pilot. It doesn’t need to lean on Batman as a crutch, which has been a frequent problem with extended DC media in general these days. The young Bruce Wayne is ultimately a very minimal presence in the pilot (though he’s played with a great sophisticated and mature edge by David Mazouz), and the show is very much about how the law tries to uphold itself through Gordon, before Batman inevitably has to step in many years later. With that said, I am looking forward to more of Sean Pertwee’s equally minimized presence as Wayne butler, Alfred Pennyworth, who plays a more gruff and aggressive variation of Bruce’s caretaker, though one that seems no less wise.

Apparently, most of this initial season is set to focus on the rise of Oswald Cobblepot, the future Penguin, and Robin Taylor is a highlight in the part. Outwardly, Taylor’s Cobblepot is a wide-eyed and eager low-level thug with a timid outer appearance, but an undeniable violent streak. Even being such a seemingly helpless and cowardly thug at first, it’s exciting to see the occasional brief flashes of the dangerous villain that Cobblepot will one day become, best illustrated immediately after Gordon spares his life, and Cobblepot’s first act afterward is to angrily and brutally murder an innocent man, for his sandwich!

As awesome as Taylor is in his role though, if there’s any surprise presence stealing the show in this pilot, it’s Cobblepot’s boss, Fish Mooney, a lieutenant to the Falcone crime family, a sect of the mob that should be familiar to avid Batman fans. Jada Pinkett-Smith realizes who is arguably the best all-new character invented for the show at this point, being a superb mix of charming, quirky, vicious and crafty. Right from the start, she’s clearly not a woman to be messed with, and Pinkett-Smith consistently brings tons of gravitas to a great part. 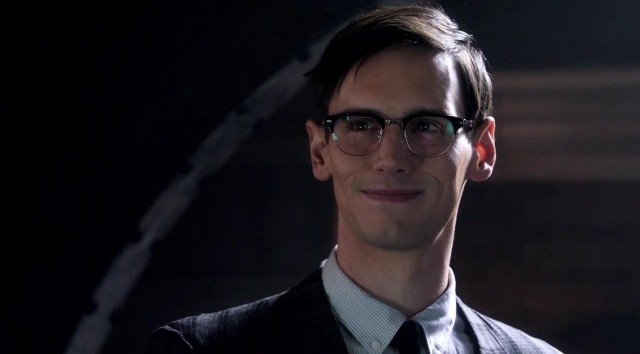 All of the building blocks are in place for a strong crime procedural with a vaguely comic book-style edge, even if Gotham is bound to improve with time. Interestingly, the only time that the pilot gets shakier is when it more aggressively tries to tie itself in to established Batman mythology. To an extent, this is understandable, since Gotham will clearly want to court established Batman fans early on, but the sheer amount of extraneous Batman-related characters that the pilot crams in for seemingly no reason feels just a tad unnecessary.

First, the case’s connection to a young Poison Ivy feels a bit forced. Gordon and Bullock investigate a lead in the Wayne murders, and it just happens to lead them to the lower-class Pepper family, with a drugged-out crook just happening to be the father of the future Poison Ivy, currently a shy and downtrodden little girl named Ivy Pepper. Sure, it’s cool to see that Gotham isn’t neglecting Batman’s more supernatural enemies, but Ivy could have been saved for a future episode, and the pilot wouldn’t have lost anything without her. 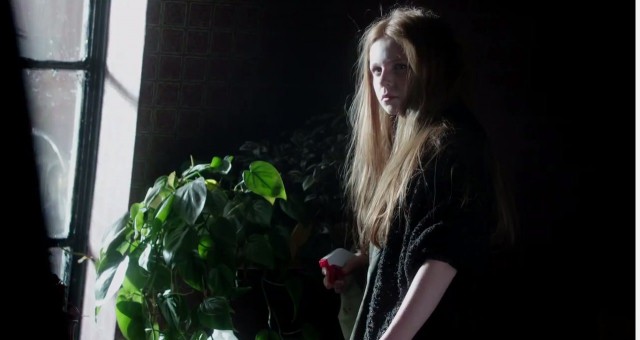 Likewise, the pilot sets up a young Selina Kyle, the future Catwoman, who is currently a streetwise tween thief and orphan who inadvertently witnesses Bruce’s parents being murdered, as this sort of mysterious guardian angel to Bruce Wayne. This is a neat idea, one that adds a cool twist to the on-again/off-again romantic dynamic between the justice-seeking Batman and the more unpredictable and self-serving Catwoman in the future, but the pilot doesn’t do anything with Selina beyond stating, “Hey, look, it’s Catwoman!” She just kind of leaps around some rooftops and watches things. Hell, poor Camren Bicondova isn’t even given any lines in the pilot!

If there’s one little tease that’s a bit more successful, it’s Cory Michael Smith as a young, pre-Riddler Edward Nigma. Working as a vaguely eccentric forensic investigator for the Gotham City Police Department, Gordon and Bullock briefly interact with Smith’s Nigma while getting word on evidence, and we immediately see that Smith is superb in the role, even in such a short scene, being mousey and seemingly benign, but genuinely off-putting too. A great line is delivered by Bullock here when he quickly becomes annoyed with Nigma’s roundabout way of speaking, whereupon he barks, “Answers, Nigma, not questions!” It’s a brilliant nod to the character’s inevitable turn as the future Riddler, a man whose desire for attention literally addicts him to questions. 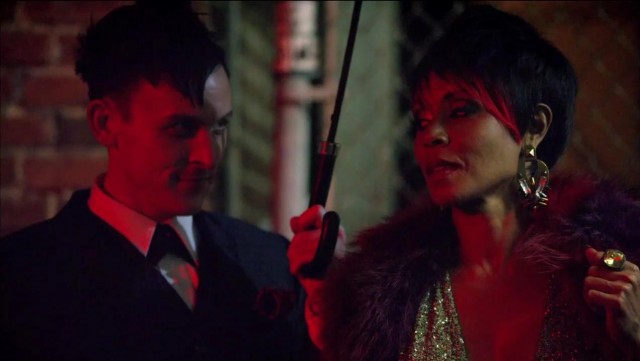 The sheer scale of the show leads to Gotham’s first episode feeling a bit rushed and overstuffed at times, but that was likely inevitable. Few fictional cities have the kind of enormously detailed legacy and mythology that Gotham City does, so it’s small wonder that the show immediately needs to jump around, trying to keep all of the necessary balls in the air, and lay all of the necessary groundwork for cases and villains to come.

All things considered though, it’s done an admirable job setting up a very promising new take on the Batman mythology, one that ironically doesn’t need Batman at all, at least not yet. Gotham is most certainly not a televised version of Batman Begins in disguise. As its title suggests, it’s about the city, not the hero who will one day defend it. After all, Gotham was around long before Batman was, and those interim years between the Wayne murders and the first coming of the Caped Crusader are ripe for expansion and all sorts of new development for the personalities, both good and bad, that one day tie together Batman’s campaign against Gotham City’s foul villains.

As much as I love Batman though, as do many other people across the world, I actually don’t miss him here. I’d say that definitely makes Gotham’s debut episode a success!

Pilot Review: Gotham
Gotham's pilot gets this promising new take on Batman's mythology off to a great start thanks to plenty of style and superb personalities, and it didn't even need Batman to boot!
THE GOOD STUFF
THE NOT-SO-GOOD STUFF
2014-09-23
80%Overall Score
Reader Rating: (0 Votes)
0%