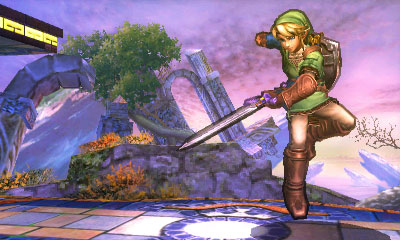 The first thing you might think of when hearing of a portable Super Smash Bros. title–or any game with hugely successful console titles and nary a single portable version–could be that the game would be light, to put it, well, lightly.

Perhaps that is why it’s so thrilling to say that Super Smash Bros. for Nintendo 3DS is such a lovingly-designed free-for-all of Smash fanfare. What a wonderful world this is.

If you’ve never played a Smash Bros. game before, we’re not entirely sure what you’re doing here, but we’ll step back a bit.

Super Smash Bros. is quite literally the biggest mashup in the Nintendo gaming world. It brings together dozens of characters, items, weapons, and worlds, into a single game in which you challenge your opponents to a brawl. The fights are ridiculously over the top, as are the worlds and the weapons, and it’s nothing short of mesmerizing.

Lately, Nintendo has been letting other games into the mix a bit, with Sonic, Pac-Man, and Mega Man joining the chaos that ensues in these games.

The collection of heroes and villains has been beautifully packaged for Nintendo 3DS, making this almost too much game for a handheld. But that’s just crazy talk.

The Smash Bros. series has always been known for having impressive visuals, though nothing mind-blowing for their current generation. The games have typically launched in the first half of a console’s lifecycle, before developers are likely to be able to take full advantage of the hardware at their command.

Nintendo 3DS is a bit of a different story, however, as the programming language for making the game work is something that developers have had about four years to master. The game takes on a unique style different from its forthcoming console counterpart, Super Smash Bros. for Wii U, and has a mixture of 3D visuals and cel-shading styles. 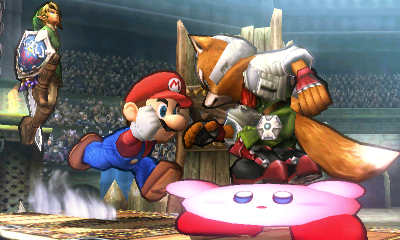 The resulting effect is a thick comic book-like outline surrounding each character, which becomes more than just a visual theme. The design makes it much easier to play the game on what amounts to a relatively small screen with a lot going on, even on 3DS XL.

As most games in the Nintendo universe tend to have, Smash Bros. carries forward a colourful, bright aesthetic that is only matched by the games these characters come from. It also doesn’t hurt that it moves at a solid 60 frames per second, a buzzword huge in the gaming industry but rarely touted on handheld titles.

What’s also immediately apparent is just how difficult it can be to actually make out the action on-screen when the camera zooms out for four-player craziness. It just doesn’t work, regardless of the screen size or if it were blown up a few times. Unless you’ve got a partial zoom on your character, it can be quite difficult to see what’s going on.

Sound design has never been an issue with Super Smash Bros. titles. It has always been excellent, and the 3DS game is thankfully no different. There will certainly be a difference in quality when compared to the forthcoming Wii U version of the game, but that’s to be expected.

Music is sourced from every game that features a character in Smash. They’ve all been respectfully used to capture the original ideal behind the music. Mario’s sounds are as authentically reproduced as Sonic’s, as are Link’s, Mega Man’s, and Kirby’s, and everyone in between.

The menu systems (more on that convoluted mess later on) are the only place where the audio is actually a bit jarring. The midi music works for a few seconds but can quickly become a drain on the eardrums. No one should be subjected to that much midi music at once. How did we ever cope in the 1990s? 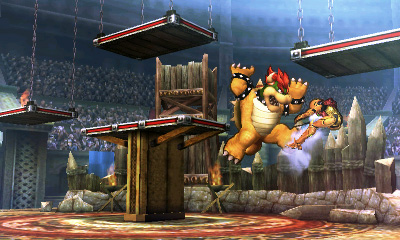 If any game should be decided on gameplay, this is it. Story doesn’t matter in Super Smash Bros. (though there is a rather feeble attempt at one), and graphics are important, but the raw fun of the game is what will make or break Super Smash Bros. for Nintendo 3DS.

Here, the gameplay makes it.

36 characters, and 12 more to unlock. And each of them has their own unique fighting combination and final smash. 34 stages. Dozens of assist trophies. Dozens of items. Custom fighters. Eight gameplay modes. Holy shit.

Each of the characters is as pleasant to play as you’d expect. Some characters like the Animal Crossing villager don’t do anything spectacular if compared to Link’s sword spin or Mario’s fireball, while others like Mega Man obliterate enemies with classic blasters.

Stages all look beautiful, and even have their own Omega modification, such as being able to remove the interactive items like moving platforms to create a simple battle arena.

With eight games modes, a couple are naturally forgettable due to overlap, but the main game style called Classic Mode (what used to be 1P mode in previous titles), remains the best and most easily accessible. All-Star mode is also quite fun as it takes the player on a journey that starts with characters from the early days of video games and moves forward in time to today.

Smash Run is a feature many have been touting as the new way to play Smash Bros., but it doesn’t really hold up. After going through a few minutes of upping the player’s stats as much as you can, you’re tossed into a randomly-selected game type. If you didn’t stat up properly, you’re just out of luck. Randomly losing games is something for a casino, not a game like Smash Bros.

As a result, sometimes too much gameplay is a bad thing, and Smash Bros. tends to tow the line pretty well considering just how much there is here. There’s a ton of game to be had, and it could have become a righteous mess. Thankfully, it all makes sense somehow.

The menus, however, are where things take just a bit of a turn. They’re scattered, to say the least, and while they’re not immediately understandable, there shouldn’t be much of an issue getting to where you need to be pretty quickly. It is curious, however, that with so many options for solo, multiplayer, and online play, rules, unlockables, items, characters, and stages, if there wasn’t a better way to tie it all together. The menus still seem to be stuck back in the days of the Nintendo 64.

Considering how poorly this game could have turned out following its storied console roots, there’s a ton of fun to be had with Super Smash Bros. for Nintendo 3DS. There are some problems with the game, sure, but none that can’t be overcome if you just avoid those game modes altogether.

There’s a lot of value in this game. Without question, Nintendo shoehorned as much content as they could possibly fit onto the minuscule 3DS cartridge, and it is worthy of being in your collection.

When the Wii U version of the game comes out, the 3DS game will have been given new life with new connectivity options and the eventual ability to use Nintendo’s upcoming amiibo figures with the game.

Super Smash Bros. for Nintendo 3DS Review
Super Smash Bros. for Nintendo 3DS delivers a portable package that's almost too good to be true. Tons of characters, tons of stages, tons of game modes. Not everything is executed perfectly, but this is one hell of a portable game.
VISUALS80%
AUDIO72%
GAMEPLAY89%
The Good Stuff
The Not-So-Good Stuff
2014-09-27
78%Overall Score
Reader Rating: (0 Votes)
0%