After some uncertainty as to whether or not Fox’s upcoming Deadpool movie would indeed share a universe with their X-Men movies, the studio has finally set the record straight; Yes, the Merc with a Mouth will inhabit the same universe as Fox’s established cinematic mutants. 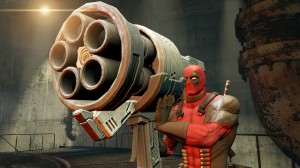 The new comes straight from X-Men: Days of Future Past writer and producer, Simon Kinberg, who is currently hard at work on the script for 2016’s next X-Men flick, X-Men: Apocalypse. While Kinberg is not directly involved with Deadpool at this point, it’s unsurprising that he would be familiar with Fox’s plan for a shared universe between the Marvel properties that they own the rights to. considering that he’s a high-ranking producer as well as a scribe. With that said, it’s still up in the air as to whether Fox’s upcoming rebooted Fantastic Four movies will share a universe with the X-Men movies or not.

In any case, Ryan Reynolds is attached, though still not formally signed to play Deadpool himself, a wisecracking mercenary that has a habit of breaking the fourth wall. Reynolds portrayed a pre-Deadpool version of Wade Wilson in 2009’s lucrative, but largely hated prequel/spin-off hybrid, X-Men Origins: Wolverine. Reynolds also voiced a CG Deadpool in some leaked test footage for the movie, which was very well-received by fans.

Tim Miller is set to direct Deadpool, with a script from Zombieland scribes, Rhett Reese and Paul Wernick. Fox has set a release date of February 12th, 2016 for the long-in-development movie.

Keep ordering up Eggplante for all of your news and updates on the Deadpool movie, and the X-Men movies.