Four episodes in, we finally got an episode for Season Eight of The Big Bang Theory that incorporated Raj more explicitly. Raj’s new girlfriend, Emily even made a comeback in the flesh for the first time since her introduction in Season Seven, with potential for her to become a larger part of the group dynamic as well… Hopefully.

The A-plot of this episode revolves around the fact that Penny and Emily appear to get off on a bad foot. Penny suspects that Emily just never liked her from the introduction, and this assumption proves correct when Emily confesses that she is uneasy around Penny due to her accidental hook-up with Raj way back in Season Four. The two appear to settle their differences by the end of the episode, only to round off with a clever shot where both women stand on opposite ends of Penny’s door, and mutter aloud, “I hate her.” Oh dear. Does this mean that Penny is going to have a season-long enemy? 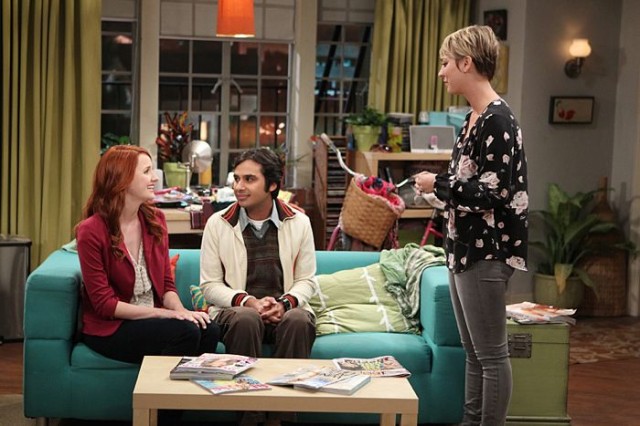 Then again, this could more likely go one of two ways. Either Penny and Emily eventually bury the hatchet and proceed as if there was never any animosity, a la Sheldon and Wil Wheaton, or Emily ultimately proves to be another short-lived love interest for Raj. It’s equally possible that Emily’s hatred of Penny may see her cast out of the group. There was an amusing moment where Raj declares that because Leonard, Sheldon and Howard are close friends, he would at least try to correspond with them with Christmas cards for a couple of years before they are dead to him, should Emily not like his group, but we all know that Raj isn’t going anywhere.

The B-Plot meanwhile revolved around the guys deciding that they wanted to invest in Stuart’s comic book shop. This is no doubt a bad plan in this economy, and that’s perhaps the joke itself, but the real heart of this storyline came from how much the comic book store really means to the guys. Even beyond that, some of the lines delivered here were hysterical, with Jim Parsons in particularly fine form as a conniving Sheldon, declaring that he can run the rival comic shop out of business by starting a rumour that it gives you genital warts, which Leonard admits is not a bad idea. It was a well-executed interaction that spanned much of the episode.

Bernadette and Amy meanwhile were left to play off of the other characters, but that’s fine. The girls acted as emotional support for Penny while she confessed her insecurities about Emily at first, ending with a humourous realization by Penny that she never liked Amy to start, and was tricked into liking her. Seeing Amy respond to this by declaring, “Shhh, Amy’s here now” was very funny right afterward.

The women also came back into play when the B-Plot rolled to a close, with the guys running the idea past their better halves, and being met with a variety of reactions, all of which were funny in their own ways. Penny naturally seemed oblivious as to what was a heavy financial stake, implying that she has mountains of credit card debt that may soon be Leonard’s problem after they get married (future episode opportunity?), Bernadette shot Howard down cold before even hearing him out, and Amy simply smiled and nodded when Sheldon made it clear that he would terminate his relationship with her if he got anything but encouragement.

Ultimately, it was all for naught anyway, since Stuart was simply handed the money to re-open his comic book shop by Howard’s mother. It was a bit of an easy fix, especially considering that Howard’s mother was never supposed to have that much money lying around. This solution is also in danger of ending the promising new Howard/Stuart dynamic by just making Stuart regress into the self-deprecating sad sack that he’s been for most of the series now, and it’s one of the sole disappointments of an otherwise great episode. 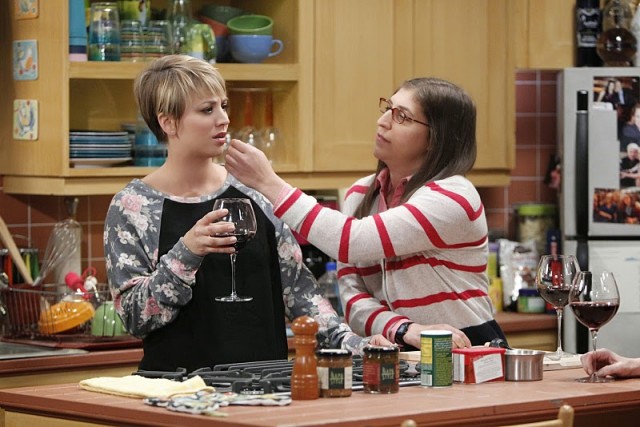 This comic book shop arc ultimately ended off the episode, with the guys lamenting that they wished that they had a quiet place with snacks to read comic books in peace, while indulging in just that activity in Leonard and Sheldon’s apartment. It was a cute conclusion, and one that worked well to tie everything together.

After last week’s middling episode, “The Hook-Up Reverberation” was overall a stronger and funnier offering. The jokes felt more fresh and amusing, the foreshadowed animosity between Penny and Emily worked well, and it was nice to see Raj get a bit more focus after spending the season on the bench for the most part so far. After this and the equally solid “The Junior Professor Solution”, here’s hoping that Season Eight can find a steadier rhythm with these better episodes sooner rather than later.