NOTE: Full spoilers for the Season Three premiere of Arrow, including a major character death, are present in this review.

Arrow kicked off its third season with what is easily its most powerful and emotionally charged premiere yet. Oliver’s world has been shaken up not just with the introduction of Grant Gustin’s Flash in his own separate spin-off series, but also with the emergence of a new foe taking up the mantle of an old nemesis, and a shocking event that will change the life of Oliver and his friends forever.

Indeed, the episode’s name is rather ironic, since there is very little ‘Calm’ to be had in viewers’ return to Starling City. Left penniless and taking up residence in his Arrow Cave following the vendetta of Deathstroke in Season Two, Oliver is at least getting some comfort in the best city sentiments that he’s ever had as The Arrow. Detective Lance, now being promoted to Captain Lance, has even disbanded the anti-vigilante task force. At first, everything seems to be coming up Oliver. 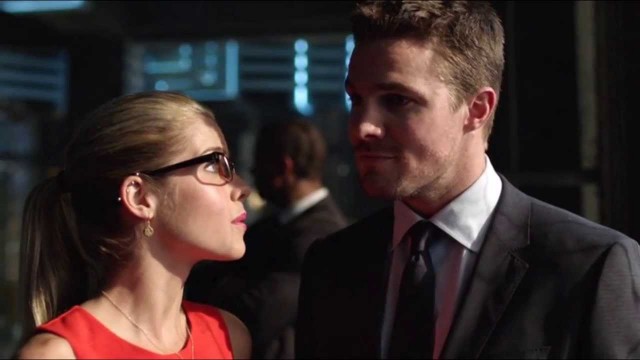 As a result of this good fortune, Oliver even does what fans have been waiting for him to do since towards the end of Season One, and finally asks Felicity Smoak out on a date. While it’s an uplifting and sweet moment between the two, it doesn’t take long for trouble to find the pair and ruin the moment, as a new Count Vertigo has come to Starling City, now played by Peter Stormare.

Stormare’s Werner Zytle, the rebooted New 52 version of Count Vertigo in the DC Comics, is still an eccentric drug pusher, but one that’s definitely a lot more outwardly savage than his nameless predecessor that Seth Gabel portrayed. Speaking in rhetoric and packing a new compound of the Starling City super-drug, Stormare immediately seizes his place as the new Count Vertigo, and makes for a superb addition to Arrow’s rogues gallery. His version of the drug is a more of a weapon than a recreational high, causing users to hallucinate about their worst fears when they use it.

Yes, this essentially makes him almost identical to Batman nemesis, The Scarecrow, but at least Stormare’s new Count Vertigo is a more believable and pressing threat than Gabel’s over-the-top goofball. It was also a nice touch when Stormare’s Count announced that he is fully aware that he is inheriting his mantle and business from someone else, declaring, “Some things never die.” Even if Oliver were to put him down, he’s right when he says that another Count Vertigo would no doubt take his place again somewhere down the line, and thensome. Thankfully though, the show doesn’t kill off Stormare’s new Count, leaving him free to return later, and trust me, that return would be very much welcome! 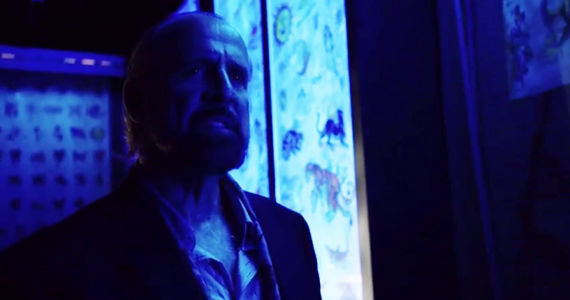 Another superb addition to the cast is former Superman actor, Brandon Routh as Ray Palmer, the man who would one day become size-changing DC superhero, The Atom, if he hasn’t already! Immediately, Routh is far more interesting here than he ever was in Superman Returns, being clever, quick-thinking and very charismatic. It finally feels like Routh is achieving his potential as another DC personality, and seeing him banter with Felicity, whom he is courting for a job after drastically outdoing Oliver in a bid to acquire the remains of Queen Consolidated, is an absolute joy.

Fans will no doubt be waiting with bated breath to see Routh don the red and blue Atom garb at some point later in the series!

Aside from the chipper presence of Routh’s Ray Palmer, “The Calm” also saw the birth of Diggle’s baby girl, which immediately started another spat between Oliver and Diggle about Diggle not being able to risk his life in the field. Thankfully, the two made peace when Oliver went to visit in the hospital, and seeing Diggle go for a handshake, receiving a hug from Oliver instead, is one of the most uplifting moments in the entire series to date. Yes, it’s inevitable that Diggle will probably return to field duty sooner rather than later, especially considering that Amanda Waller and A.R.G.U.S. probably won’t waste much time sticking their noses into the Diggle family affairs, but this new development in Diggle’s life only makes him a better character.

Speaking of Amanda Waller, she plays a bigger part in the flashback sequences now, which have now seen Oliver off of Lian Yu, and currently residing in Hong Kong. Waller has rounded up Oliver for some unknown reason, and he’s forced into the care of Tatsu and Maseo Yamashiro, with Waller threatening their child if they don’t keep Oliver confined. Tatsu Yamashiro should be known to DC enthusiasts as spiritual heroine, Katana, though if anything, her husband, Maseo has more bearing at this point, being the one that interacts with and handles Oliver the most for now.

This new setting does a great job of mixing up the flashback sequences, since Lian Yu is starting to become a bit of a repetitive setting at this point. Yes, we know that Oliver eventually ends up dumped back on the island again, but at least we get a change of pace in the meantime, especially given that this is no doubt when Oliver’s training gets refined more than ever in his journey to becoming Starling City’s vigilante protector.

This merely leaves the big shocking twist at the end of the episode, and one that I’m surprised that the showrunners didn’t save for later in the season. Yes, many viewers no doubt saw it coming at some point, but it was still heartbreaking to see Sara Lance suffer a sudden and unpleasant death at the hands of a mysterious assailant. The episode ending with a distraught Laurel screaming with her sister’s limp corpse in her arms was a powerful image, and no doubt the first step to Laurel succeeding her sister as the DC Television Universe’s Black Canary, particularly with Sara’s last words remarking to Laurel that saving the world runs in the family. It’s probably no accident that the showrunners have gradually made Katie Cassidy just a wee bit more blonde with every season…

At first, seeing Sara just merrily return out of nowhere to bail Oliver out of trouble with Count Vertigo’s thugs seems annoying, as if her big departure at the end of Season Two was ultimately meaningless. Clearly though, she was running from something or someone. This will no doubt be revealed as the League of Assassins comes back into play in a big way throughout Season Three, and fans will likely enjoy guessing who Sara’s killer ultimately is in the meantime.

The only thing that this otherwise stellar season premiere was missing is the complete absence of Merlyn and Thea, particularly with the big fanfare about John Barrowman taking a regular role as the Green Arrow arch-nemesis in Season Three. Given that Season Two ended with the big shock that Thea has gone off with Merlyn for some unknown new life, it was disappointing to see nary a glimpse of what these two are up to, especially since it presents ample opportunity to begin Thea’s development into Green Arrow sidekick, Speedy. Sure, the showrunners probably just couldn’t fit them in to the narrative flow of this premiere, but it’s a let-down nonetheless.

At the very least, Roy Harper finally got to become a full-time partner to Oliver, sporting an awesome new costume, complete with red gear, a hood, and a domino mask of his own. He’s also learned some killer new fight moves, as this premiere’s great action scenes prove more than once. While he’s not directly referred to by his DC moniker of “Arsenal” in this episode, there’s no question that the costume is evoking his hero moniker from the DC printed pages. It will be great to see more of him as a full-blown, ass-kicking sidekick to Oliver!

After the incredible momentum of an excellent second season, Arrow continues to shine as arguably the best comic book-inspired show on television at this point. With spin-off, The Flash having its own superb premiere yesterday as well, the future looks incredibly bright for The CW’s DC Television Universe!

Arrow 3.1: "The Calm" Review
Arrow returns stronger than ever with an excellent Season Three premiere, introducing a new twist on a former villain, and shaking up Team Arrow with a sudden and tragic death.
THE GOOD STUFF
THE NOT-SO-GOOD STUFF
2014-10-09
96%Overall Score
Reader Rating: (2 Votes)
98%