“The Jimmy Jab Games” offered a plot that’s already been done on The Office, and that’s before you consider that it has to follow last week’s stellar episode, “Chocolate Milk.” Naturally, “The Jimmy Jab Games” isn’t quite up to the incredible pedigree of last week’s episode, but even with a recycled A-plot, it still manages to be reasonably funny shenanigans for the crew of the Nine-Nine this week.

The A-plot of the episode is actually kicked off by the B-plot, whereupon Captain Holt and Sergeant Jeffords step out to meet with Deputy Commissioner Madeline Wuntch again. I commented last week that I couldn’t wait to see Kyra Sedgewick’s guest character return to torment Holt again, and it looks like the show didn’t waste any time tearing down the captain’s typically stoic and professional demeanour with his well-realized career foil!

Thankfully, Jeffords’ presence prevented this plot from feeling recycled from the previous episode. Holt and Wuntch still got some sublime jabs in on one another, but Jeffords helped to ground Holt and remind him of what’s truly at stake when he’s forced to seek aid over a new party drug called, ahem, ‘Giggle Pig’. Giggle Pig is definitely going to come around again, but more on that in a bit.

Outside of Holt, Jeffords and Wuntch, the main precinct was taking part in the episode’s titular, “Jimmy Jab Games”, an absurd series of competitive events that Peralta helped to spearhead while being tasked with working on the defense of a former Iranian president. Yes, Peralta is just that unprofessional, but that shouldn’t be surprising at this point. Again, this plot was already done during The Office’s second season, with the “Office Olympics”, but despite this, Brooklyn Nine-Nine’s version of the premise still elicited some good chuckles, as each event truly ended up being more asinine and random than the last.

On this note, the subtle gag of Gina signaling the start of each event by declaring famous “Mark’s” (i.e. Wahlberg, Ruffalo, etc..) was pretty clever.

The latest Jimmy Jab Games came with an extra wrinkle however, as Peralta used the events to try to negotiate for the phone number of Diaz’s apparently attractive off-screen friend, Katie. Mercifully, Diaz was finally given something to do this episode as a result, which is wonderful, since poor Stephanie Beatriz has spent all of Season Two on the bench so far. She still wasn’t given enormously compelling material this week, but the tease at the end of the episode that she’ll be heading up the Giggle Pig task force that Holt conspired for at least promises that Diaz will have higher bearing later in the season. 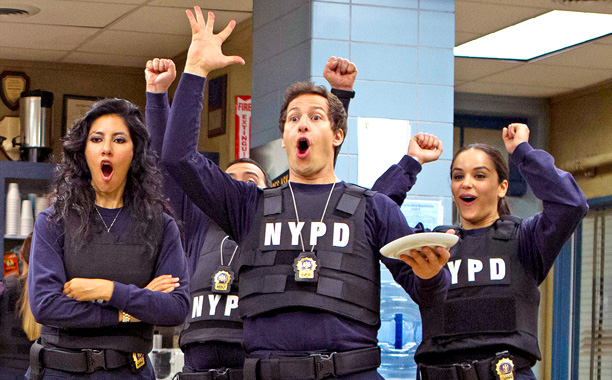 If Diaz being sidelined was to set up the character for bigger laughs to come later in the season, I suppose I can live with that sacrifice.

Anyway, naturally, Peralta doesn’t get over his repressed feelings for Santiago so easily, which was made all the more funny when Santiago delivers her own Peralta-style victory dance upon winning the Jimmy Jab Games, after asking him to pick one, and just ending up combining the two options in the end. The revelation that Peralta allowed Santiago to win the Jimmy Jab Games to Diaz bordered on eye-rolling, but thankfully, Diaz gave him Katie’s number anyway, and insisted that he move on. It was great to see Peralta and Diaz acknowledge their longstanding friendship again, since they haven’t really had a good buddy moment since the whole Pontiac Bandit incident from Season One, despite going through the police academy together.

Finally, over in the C-Plot, we had Boyle paired up rather unexpectedly with Hitchcock, normally a more minor character that simply serves as the butt of jokes. This proved to be the most clever and interesting element of the episode, with Hitchcock inadvertently getting ahold of evidence that Boyle and Gina are sleeping together, and forcing Boyle to do all of these seemingly simple, but hilariously hopeless tasks to try and get the tape back. The fact that Hitchcock keeps trying to push everything further was very funny, finding clever ways to make Boyle have Peralta bring up Hitchcock’s name without an insult following it, and declaring to the entire precinct that Hitchcock is handsome, among other things.

On one last note here, the passing glimpse into Boyle and Gina’s undercover sex life was brief but hysterical, with Gina being supportive of Boyle’s sexual talents in a very dry, condescending way, while Boyle is trying to work out afterward. It really does seem like these two are an oddly effective couple in the making, and more teases like this would certainly be welcome throughout the season.

“The Jimmy Jab Games” wasn’t oozing with novelty by any stretch, but it got the job done for Brooklyn Nine-Nine this week. It continued to deliver some good laughs, it finally gave Diaz something to do, and I have a feeling that the Giggle Pig task force is going to be quite a lot of fun!