After an action-packed premiere that saw Rick’s group reunited and stronger than ever, The Walking Dead proceeded on with a new destination in mind. First however, we have a new survivor, and a new shelter, which is where the key conflict of this episode came in.

Rick and co. stumble upon a priest named Gabriel, whom they bail out of being Walker chow. Gabriel leads them to a church, which proves to be temporary refuge for the group, and in return, they help him scavenge from the one place that he can’t get supplies from, since it’s the one nearby place that’s overrun by Walkers.

Naturally, the show doesn’t waste much time raising questions about Gabriel’s suspicious backstory. He has apparently never killed a Walker, or a person, and has survived on his own for a long time, simply eating from a food drive that was completed right before the outbreak, and then scavenging from nearby settlements. As you can imagine, Rick doesn’t trust Gabriel as far as he can throw him, which leads to Gabriel tagging along for the group’s latest supply run. 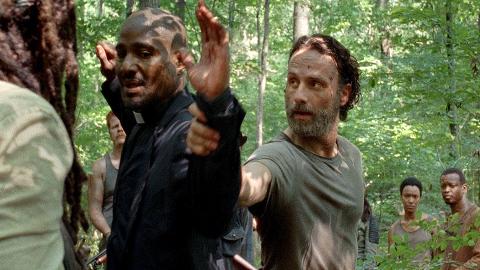 The supply run was the only time the episode provided some action. After descending into a pit of slimy rainwater, Rick and friends had to fight off Walkers, while Gabriel cowered in a corner, spooked by a Walker he recognizes, and naturally completely useless in combat. It makes the character appear benign, albeit a liability that probably won’t last long at this rate, and at the very least, Carl appears to trust him whole-heartedly. This made Rick’s speech to his son about never being safe and one second being the difference between life and death hit with all the more strength.

If anything though, Gabriel is almost written a little too helpless so far, which is the only noticeable issue with this episode. Given that he’s a blatant coward and has zero survival skills, it’s very difficult to believe that he was able to survive so long by himself, even if he did barricade himself in a church. How did he never once run into Walkers while scavenging? How did no other survivors break in and kill him for what are obviously ample food supplies from a populated area? He’s either the luckiest man in the apocalypse, or the script has a couple of holes in it. Sadly, I’m inclined to lean towards the latter assumption.

Of course, someone scrawling, “You’ll burn for this!” on the wall of the church would seem to indicate that Gabriel’s keeping some of his backstory to himself so far. Does this mean he hoarded supplies to himself, and let others be eaten insead? Is that an acceptable price to pay for survival? At the very least, this new character does effectively raise these compelling questions. 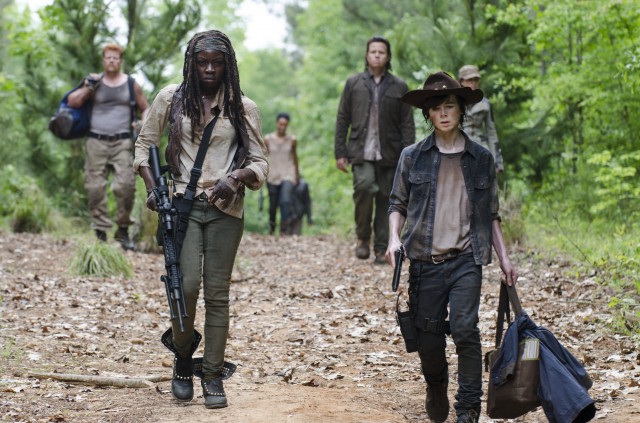 In fact, while it’s no doubt an overarching theme of the series, “Strangers” really hammered home its titular question. What’s the meaning of trust in a world that’s fallen apart? How do you vet someone’s story when there’s no way to vet it? Is blind trust or perpetual distrust a better policy? Carol’s uneasiness with re-joining the group helped to cement the issues with misplaced trust, though Rick saving Gabriel when he really didn’t have to, twice, would still appear to indicate that trust can pay off better than trying to take everything on your own shoulders.

For the most part, this leads to an episode that is very dialogue and introspection-heavy, though one that also finally has Abraham speak up, and pitch a trip to Washington for the group. Whether or not they stick to this plan remains to be seen, given that Daryl and Carol drive off in pursuit of the car that once snatched Beth, and Bob ends up in a bad way after being knocked out and tied up by the surviving Terminus cannibals… With part of his leg missing! 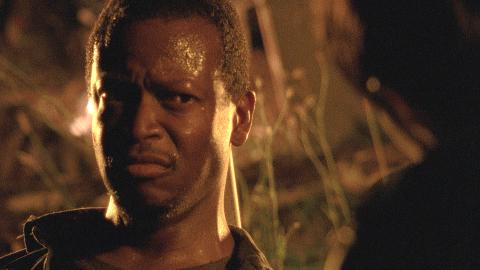 This was a chilling way to end the episode, with the discovery that the Terminus thugs have chopped off, cooked and eaten Bob’s leg. Gareth’s attempt to comfort Bob by saying that he tasted better than they imagined was an especially foreboding line as well, on top of a montage of the survivors enjoying a feast after their successful supply run, with Terminus vowing to hunt them all. This would appear to explain the Season Five tagline, “Hunt or Be Hunted”, and should hopefully provide the show’s best villainous living threat since The Governor.

“Strangers” was a strong sophomore episode for Season Five, one with no major weaknesses. There were plenty of appealing character moments, and it was nice to see the show dial back some of the more gratuitous and forced zombie fetishism from the premiere, instead going back to the character stories that have been the true heart of The Walking Dead. It seems like the foundation is continuing to be laid for a standout season, especially with some hungry Terminus cannibals putting Rick’s crew in their sights.

The Walking Dead 5.2: "Strangers" Review
"Strangers" delivered a character and dialogue-focused episode that brought The Walking Dead back to its best foot, presenting tons of promise for what is hopefully a standout season!
THE GOOD STUFF
THE NOT-SO-GOOD STUFF
2014-10-20
90%Overall Score
Reader Rating: (0 Votes)
0%