Last year’s Season One episode, “Halloween” marked the turning point for Brooklyn Nine-Nine; The point where the show went from being pretty good, to being damn great televised comedy. Peralta finally managed to one-up Captain Holt in a bet to steal his prized medal of honour, and he did so with the help of the entire precinct, bringing everyone together for a fun and funny heist episode that felt as memorable as it was hysterical. It was the point where the show finally became interesting and started to actually graduate to its creative potential.

This year, we’re getting a sequel episode, “Halloween II”, with Peralta looking to double-down on his win from Season One. This time, he proposes that he can steal Captain Holt’s watch right off of his arm, betting “five-tuple” nights of unpaid overtime on weekends, with Holt having to do Peralta’s paperwork if he loses. Similar terms as last year, even with the heightened stakes. Once again, the game is on! 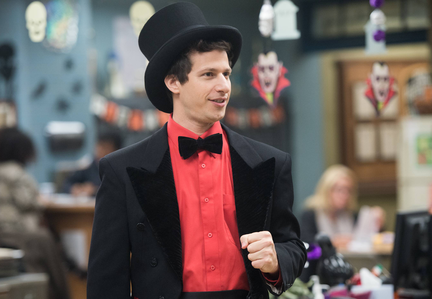 Now, to start, this is a cool idea for a Halloween tradition on Brooklyn Nine-Nine. Just as The Simpsons has its traditional Treehouse of Horror anthology during every Halloween season, Brooklyn Nine-Nine can have Peralta and Holt suspending all professionalism to take out all of their pent-up frustration at each other over the course of the entire year, squaring off in a battle of wits to decide who is truly the top man at the precinct. It will no doubt be a delight to have viewers guessing every year who the winner may turn out to be.

As you can imagine then, it was Holt that claimed victory this year, restoring the balance between his and Peralta’s stubborn drive to succeed. Despite Peralta initially having the perfect plan to steal the captain’s watch, Holt outsmarted Peralta by planning even further back, to the point where he predicted Peralta’s plan, and paid off Peralta’s allies to double-cross him. The revelation that, unlike last year, Holt rallied the troops simply by promising that they get a chance to humiliate Peralta was quite funny as well, considering that Peralta had to promise to do everyone’s paperwork to get them to play ball last year.

Andre Braugher really stole the show this week as he recounted his devious plot to Peralta. With Peralta paying off a criminal to steal the captain’s watch, only to have the criminal try and steal the watch to extort money from him (which actually ended up being Boyle’s money, go figure), Holt recounts how he started plotting his revenge immediately after Peralta’s victory last year, drawing “word bubbles” on a notepad, and setting up the ploy all year, complete with tempting Peralta with his watch by commenting on his perpetual tardiness, and even having Diaz make sure to draw attention to a highly skilled pickpocket. This was wonderfully rounded off by Peralta declaring that he is already planning his revenge for next Halloween, only to have Holt respond, “Good, then you’re only three months behind.” It was a big laugh that Braugher executed perfectly. 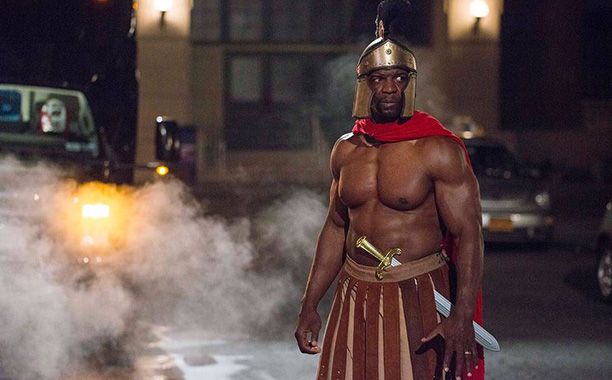 In fact, the only flaw with Holt’s plan is that it’s probably a bit predictable for the viewer. Given how much the camera hangs on the conveniently drunk teddy bear men and hard-partying party bus riders that stymie Peralta’s progress, it gets to the point where the episode is tipping its hand. It’s pretty clear that Peralta is being outfoxed even early on, though Andy Samberg still provides plenty of chuckles as Peralta’s hubris is continually stamped on by Holt’s superior planning.

That said, it’s pretty alarming that Peralta doesn’t seem to notice losing his badge, his wallet, his ID, and pretty much anything else that should be on his person at all times, especially as a cop. The fact that he hired a criminal to steal Holt’s watch is also uncharacteristically stupid, given that Peralta may be a man-child, but he proved last year that he’s certainly not an idiot.

Despite all of this craziness, the episode still fit in a B-plot, with Gina being kicked out of her dance group, Floorgasm, which, until now, has been nothing more than a background gag. The news being delivered entirely in interpretive dance was hysterical, and the reveal to Sergeant Jeffords that Gina has been neglecting rehearsals because she has been trying to finish her college degree was a pretty surprising and cool moment for her character. It was also funny when Gina shot down the notion that her full-time work got in the way of her dancing at all, reminding us that Gina is fully self-aware of her own on-the-job laziness at the precinct, and the final scene with her and Jeffords dancing on stage together was just as amusing. The ladies in the audience no doubt won’t mind the chance to see Terry Crews shirtless either.

The outcome may have been predictable, but “Halloween II” was a charming and funny follow-up to last year’s Halloween episode, even if it falls just shy of that episode’s quality. It does mark the start of something beautiful though; A potential new Halloween tradition of Peralta and Holt squaring off in a petty, but hilarious duel of egos.