After two very strong debut episodes for The Flash, effectively developing its title character as a superb new hero to tune in to on television every Tuesday, “Things You Can’t Outrun” started to shift the focus a little more to the supporting players, namely Caitlin Snow and Iris West, who both had more high-profile conflicts this week. Even then, we still got a new metahuman threat from the DC printed pages, and Barry still continued to come into his own as a hero, continuing to learn about respecting his limitations.

In fact, Barry’s flaws and shortcomings are something that this new series has portrayed incredibly well. Barry is definitely not invincible once he puts on that red gear, as Detective West directly points out to him. For every person he saves, there’s going to be a person that he can’t save. Not only that, but despite his incredible speed powers, Barry is not omnipotent. He can’t be everywhere at once. He can’t right every wrong in the world, or even Central City. Part of being a hero is understanding and accepting defeat, and it was wonderful to see this episode explore these themes in such effective detail. 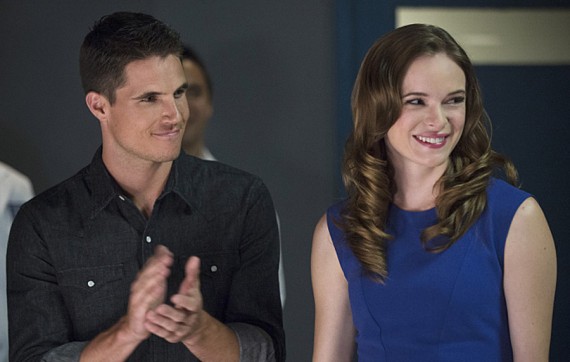 A big part of this was delving into more of the backstory of Caitlin Snow, namely the “death” of her fiance, Ronnie Raymond, whom DC fans already know is most certainly not dead, but whatever. Helpless to save Ronnie, both Caitlin and Cisco had their own flashbacks and reminders of what was lost during the night of the particle accelerator explosion. Caitlin’s loss was given a bit more attention, but it was cool to see that even the perpetually wide-eyed and chipper Cisco has some pain behind him too. particularly given that he was ultimately the one forced to initiate lockdown and seemingly doom Ronnie to death.

Naturally, Robbie Amell, cousin to Arrow star, Stephen Amell made his debut this week. Trying to put aside the fact that the family resemblance is quite apparent here, Amell’s Ronnie is a departure from the Ronnie Raymond of DC’s printed pages, but in a good way. A little older and wiser, and ditching the arrogant jock persona from the comics, Ronnie is immediately likeable, and is already shown to have the heart of a hero, selflessly sacrificing himself to save Central City from obliteration. The moment of his sacrifice may ring a bit hollow for DC fans, since they would already be aware that Ronnie Raymond will soon resurface as DC superhero, Firestorm, but it was cool to see Caitlin refer to their couples’ dynamic as, “Fire and ice”, a tease to their future comic book identities as Firestorm, and icy villainess, Killer Frost from the DC Comics Universe. 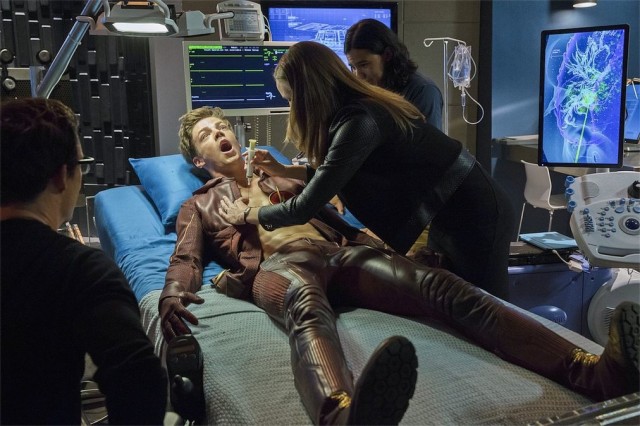 Aside from the business at S.T.A.R. Labs, Iris West and Eddie Thawne got some slightly bigger bearing this week, as they decided to tell Detective West that they are dating. Iris struggling with her father’s expectations, and never having a serious boyfriend before, helped to ground her character a bit more effectively than the prior episodes did, though Eddie still seems to be finding his place on the show. DC fans know that Eddie is probably not who he appears to be, but his character seems perfectly reasonable and charming, and a genuinely good guy. It might feel like a bit of a heel-turn if he abruptly becomes a bad guy, as is the expectation with the DC faithful at this point.

In any case, this arc came to a satisfying end, when it was revealed by Detective West in the hospital that he was already aware that the two were a couple, reminding them that he’s been a detective for a long time, and naturally he figured it out already. He still wasn’t thrilled, and this has to make you wonder if his dynamic with Eddie will now change in upcoming episodes, but it was good to see that the character is still separating himself nicely from the disapproving Detective Lance over on Arrow, trusting his daughter’s judgment, and claiming that, if Iris likes Eddie, he’ll do his best not to shoot him. It was a cute and uplifting moment. 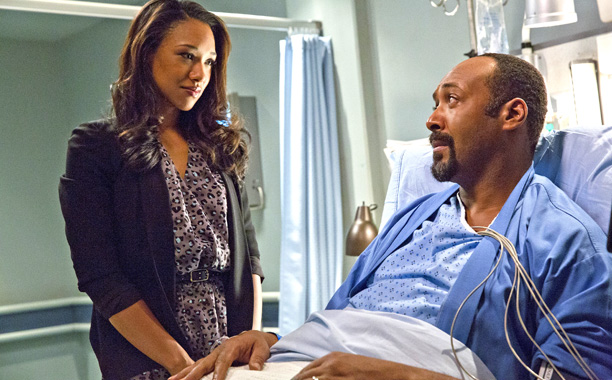 The show’s strengths are still very much intact in its third episode, but once again, the villain was pretty ho-hum unfortunately. Kyle Nimbus was our villain-of-the-week for this episode, whom DC fans may remember as Starman antagonist, The Mist, who has the ability to turn himself into vapour, and in this case, deadly poison gas. He was a pretty bland baddie, simply left to skulk around creepily and give people an unnerving stare, though he was thankfully the first villain that didn’t end up dead by the end of the episode, even if it’s just as likely that Multiplex faked his demise last week.

This led to a very good development for the show, that being a specialized metahuman prison built under S.T.A.R. Labs by Harrison Wells and Cisco, modified slightly from the particle accelerator’s remains. Mist was left in the first containment cell, but I’m personally ambivalent as to whether or not they bring his character back at any point.

That said however, one thing I did really like about Mist is that the special effects behind him were outstanding, especially for early TV show standards! The thick, eerie green fumes that formed the villain were realized incredibly well, almost Hollywood well, and it made for the most visually exciting action moment on the show since Barry’s original duel with false Weather Wizard, Clyde Mardon. The way that Barry ultimately subdued the villain was also quite clever, continuing to prove that he’s still mainly relying on his brains and not his powers to come out on top, making the show’s title hero a lot more interesting. 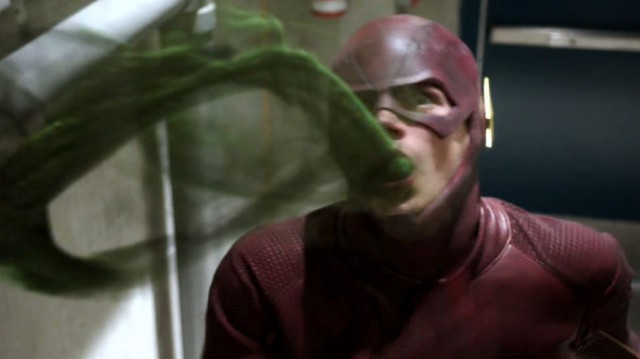 “Things You Can’t Outrun” continues to prove that The Flash is no fluke, and that its supporting leads are just as appealing to watch as The Fastest Man Alive himself. The show continues to make lots of great strides, and it’s rapidly starting to rival Arrow as the best primetime superhero show on television right now!