After slipping a bit last week with “Face My Enemy”, Agents of S.H.I.E.L.D. rebounded superbly this week with “A Hen in the Wolf House”, another fantastic episode of a much-improved Season Two, which finally got Simmons out of her undercover assignment with HYDRA, and back with her familiar team.

This episode also saw the introduction of Adrianne Palicki’s Bobbi Morse, whom Marvel fans know as pivotal Marvel comic book Avenger, Mockingbird. Initially appearing to be a high-ranking HYDRA agent probing a leak, Morse is quickly revealed to be another mole planted in the organization by Coulson, and ultimately turns out to be Simmons’ extraction plan when her cover is compromised. Even in her first appearance, Palicki is shown to kick plenty of ass in the role, and Coulson recruiting her to his team full-time should lead to plenty of great developments in future episodes of Agents of S.H.I.E.L.D.! 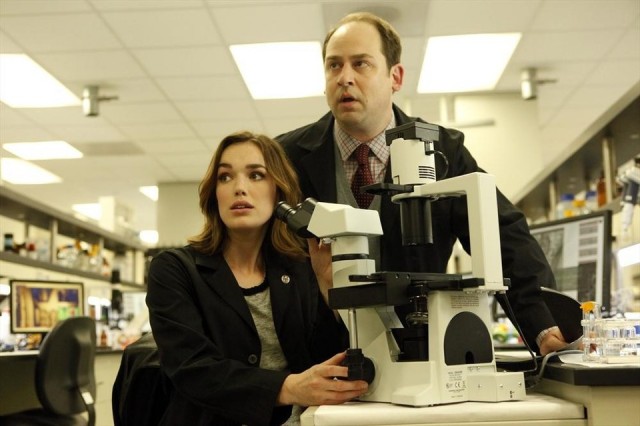 On this note, Simmons’ response to Bobbi was nothing short of adorable. Informal and straight-laced, yet definitely a brusier, Simmons even declares aloud, “Wow, I like you!”, and it will be fun to see Simmons get such a hard-hitting lady friend, since Skye has been the only other female on the team that Simmons interacts with semi-regularly.

It was also surprising and amusing to learn that the ex-wife that Lance Hunter has been complaining about and insulting for the entire second season so far is in fact, Bobbi Morse! Even more hilarious was the reveal that Hunter was only recruited to Coulson’s team because Bobbi recommended him. As fun as it is to anticipate Bobbi being a buddy to Simmons, the comedic possibilities of Hunter now being forced to work alongside the ex-wife he apparently hates, despite the fact that she clearly doesn’t hate him, is even more fun to think about. The episode’s cheeky line where Hunter exclaimed, “What did you do to your hair?!” was also very funny, referencing Palicki being a redhead for the role, despite Bobbi being a blonde in the Marvel comics.

Anyhow, Simmons being compromised came from a desperate ploy by Raina, who threatened to E-mail the identity of the mole in HYDRA to every HYDRA employee, if Coulson refused to turn over Skye, as her father is, “Trying to put his family back together.” It was a very well-done moment, particularly when Coulson refused to capitulate to Raina’s demand, and seemingly wrote Simmons off to be killed. Naturally, he had a backup plan for just this kind of thing, thanks to Bobbi, proving that he’s already settling quite nicely into his role as S.H.I.E.L.D.’s new director. This would no doubt put Raina in a tight spot, especially given that she’s now caught between both Dr. Whitehall, and Skye’s father.

Speaking of Skye’s father, he showed up again this week, and it’s starting to become pretty apparent that he’s not the best fellow. Skye witnesses his murderous streak, and takes it oddly well when Coulson confronts her about it, simply declaring that he needs to be stopped. It’s another great testament to how much Skye has matured since Season One, especially considering that her family is an apparent weakness that Ward exploited a couple of episodes back.

Oh, and speaking of Ward, he was the one to drop the bomb that Raina knows Skye’s father. The team suspected him of lying at first, but naturally, he was quickly proven to be right. This would appear to indicate that Ward may actually be trying to do better with Skye, but, of course, the show is still doing a great job of keeping us guessing with Ward’s character.

Ward is apparently going to play a big part in next week’s episode too, given that this week’s concluded with Dr. Whitehall and Skye’s father appearing to form an alliance, after Skye’s father declares that he can stabilize the alien weaponry that HYDRA derived from The Obelisk, and is currently struggling with maintaining, as a chilling opening moment illustrates, with HYDRA murdering almost an entire wedding’s worth of people, just for the sake of an experiment. Oh, and thanks to Skye’s father, HYDRA has The Obelisk now, which he reveals is known as, “The Diviner” in its native language. That’s not good.

Overall though, this episode was so strong, because of how well it dealt with the character conflicts it’s brought up, and the fact that it didn’t pull punches with any of them. Seeing Simmons plant evidence in her co-worker’s desk to stall for time and knowing full well that he’ll be killed for it, even if it was a bad co-worker that was excited about killing people, was probably her character’s darkest and most controversial moment yet. Likewise, Skye having to cope with finding out that she may be an alien, since she learns that only Coulson has been affected by the GH formula with his carvings, then discovering the truth about her father, was handled with just the right mix of shock, confusion, and ultimately, acceptance for the good of the team.

Oh, and as many suspected, Coulson’s carvings are indeed some kind of extra-terrestrial map, as confirmed by Skye. To where? We don’t know yet, but at least it finally sets the record straight.

It was also great to see the first moments of Simmons reuniting with Fitz, despite the fact that Fitz apparently is still talking to imaginary Simmons, despite the fact that he appeared to get over his dependence on Simmons’ memory after last week. This will no doubt come back into play next episode, but seeing as both Fitz and Simmons have seen some outstanding new development in Season Two, it will be interesting to see how their characters now interact after their reunion, particularly with Fitz believing for so long that Simmons abandoned him and Coulson’s agents.

In every respect, “A Hen in the Wolf House” continues Agents of S.H.I.E.L.D.’s upward rise in quality throughout Season Two. With HYDRA getting a dangerous new artifact (along with the allegiance of Skye’s father),and Coulson’s crew now fully together, it seems that this battle is about to get a lot more heated over the next several episodes!